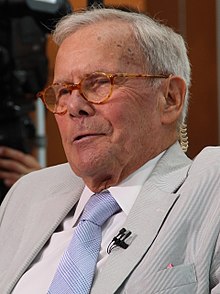 The height of Tom Brokaw is …m.

1. Where did Tom Brokaw come from ?

Thomas John Brokaw (/ˈbroʊkɔː/; born February 6, 1940) is an American retired television journalist and author. He first served as the co-anchor of The Today Show from 1976 to 1981 with Jane Pauley, then as the anchor and managing editor of NBC Nightly News for 22 years (1982–2004). He was also a weekend anchor for the program from before from 1973 to 1976. He is the only person to have hosted all three major NBC News programs: The Today Show, NBC Nightly News, and, briefly, Meet the Press. He formerly serves as a special correspondent for NBC News and works on documentaries for other outlets.

2. What could we know about Tom Brokaw besides his height ?

Along with his competitors Peter Jennings at ABC News and Dan Rather at CBS News, Brokaw was one of the “Big Three” news anchors in the U.S. during the 1980s, 1990s and early 2000s. The three hosted their networks’ flagship nightly news programs for over 20 years, and all three started and retired from the anchor chair (or died, in Jennings’ case) with Dan Rather notably being fired from CBS due to false reports broadcast on 60 Minutes II within a year of each other.

3. What are the projects of Tom Brokaw ?

Brokaw has also written several books on American history and society in the 20th century. He is the author of The Greatest Generation (1998) and other books and the recipient of numerous awards and honors including the Presidential Medal of Freedom, which was awarded to him by President Barack Obama in 2014.

On January 22, 2021, NBC announced that Brokaw would retire after 55 years at the network, one of the longest standing anchors in the world at the same news network, along with Ecuadorian news anchor Alfonso Espinosa de los Monteros who has been in Ecuavisa since 1967.

Brokaw was born in Webster, South Dakota, the son of Eugenia “Jean” (née Conley; 1917–2011), who worked in sales and as a post-office clerk, and Anthony Orville “Red” Brokaw (1912–1982). He was the eldest of their three sons (brothers named William and Michael) and named for his maternal great-grandfather, Thomas Conley.

His father was a descendant of Huguenot immigrants Bourgon and Catherine (née Le Fèvre) Broucard, and his mother was Irish-American, although the origin of the name Brokaw is contested. His paternal great-grandfather, Richard P. Brokaw, founded the town of Bristol, South Dakota, and the Brokaw House, a small hotel and the first structure in Bristol.

Brokaw’s father was a construction foreman for the Army Corps of Engineers. He worked at the Black Hills Ordnance Depot (BHOD) and helped construct Fort Randall Dam; his job often required the family to resettle throughout South Dakota during Brokaw’s early childhood. The Brokaws lived for short periods in Bristol, Igloo (the small residential community of the BHOD), and Pickstown, before settling in Yankton, where Brokaw attended high school.

As a high school student attending Yankton Senior High School, Brokaw was governor of South Dakota American Legion Boys State, and in that capacity he accompanied then-South Dakota Governor Joe Foss to New York City for a joint appearance on a TV game show. It was to be the beginning of a long relationship with Foss, whom Brokaw would later feature in his book about World War II veterans, The Greatest Generation. Brokaw also became an Advisory Board member of the Joe Foss Institute.

Brokaw matriculated at the University of Iowa in Iowa City, Iowa, but dropped out after a year as he apparently failed to keep up in his studies, in his words majoring in “beer and co-eds”. In 2010, he was awarded an honorary doctorate from the University, and he later donated his papers to the University of Iowa Libraries. He joked that the “honorary degree is especially coveted because it helps to make up for the uneven (to put it mildly) performance of my freshman year.” He later transferred to the University of South Dakota, where he graduated Phi Beta Kappa in 1964 with a Bachelor of Arts degree in political science.

For several years, Brokaw mountain-climbed with the “Do Boys,” whose members included Yvon Chouinard and Douglas Tompkins. He owned a 53-acre home in Pound Ridge, New York, for over two decades.

Brokaw’s television career began at KTIV in Sioux City, Iowa followed by stints at KMTV in Omaha, Nebraska, and WSB-TV in Atlanta, In 1966, he joined NBC News, reporting from Los Angeles and anchoring the 11:00 pm news for KNBC. In 1973, NBC made Brokaw White House correspondent, covering the Watergate scandal, and anchor of the Saturday editions of Nightly News. He became co-host (with Jane Pauley) of NBC’s Today Show in 1976 and remained in the job until 1981, when he was succeeded by Bryant Gumbel.

He kept a closely guarded secret for many years, in 2017 Brokaw wrote of having been offered – and having promptly turned down – the press secretary position in the Nixon White House in 1969. While living in California before Nixon made his political comeback, Brokaw had come to know H. R. ‘Bob’ Haldeman (White House chief of staff and initiator of the offer) as well as Nixon’s press secretary, Ron Ziegler, and others members of the White House staff.

In 2019, Brokaw wrote a book entitled, “The Fall of Richard Nixon: A Reporter Remembers Watergate”, about his experiences working as a reporter and experiences as a member of the White House press corps.

On April 5, 1982, Brokaw began co-anchoring NBC Nightly News from New York with Roger Mudd in Washington, succeeding John Chancellor. After a year, NBC News president Reuven Frank concluded that the dual-anchor program was not working and selected Brokaw to be sole anchor. The NBC Nightly News with Tom Brokaw commenced on September 5, 1983. Among other news items, he covered the Challenger disaster, EDSA Revolution, Loma Prieta earthquake, fall of the Berlin Wall and Hurricane Andrew.

Brokaw scored a major coup when, on November 9, 1989, he was the first English-language broadcast journalist to report the Fall of the Berlin Wall. Brokaw attended a televised press conference organized in East Berlin by Günter Schabowski, press spokesman for East German Politburo, which had just decided to allow its citizens to apply to permanently leave the country through its border with West Germany. When Schabowski was asked when this loosening of regulations would take effect, he glanced through his notes, then said, “sofort, unverzüglich” (“immediately, without delay”), touching off a stampede of East Berliners to the Wall. Brokaw had an interview with Schabowski after the press conference, who repeated his “immediately” statement when pressed. Later that evening Brokaw reported from the west side of Brandenburg Gate on this announcement and pandemonium that had broken out in East Berlin because of it.

As anchor, Brokaw conducted the first one-on-one American television interviews with Soviet leader Mikhail Gorbachev and Russian President Vladimir Putin. He and Katie Couric hosted a prime-time newsmagazine, Now, that aired from 1993 to 1994 before being folded into the multi-night Dateline NBC program.

Also, in 1993, on the first broadcast of Late Show with David Letterman on CBS, in response to David Letterman’s monologue containing jokes about NBC, Brokaw walked on stage in a surprise cameo (accompanied by Paul Shaffer and the CBS Orchestra playing the NBC Nightly News theme). He congratulated Letterman on his new show and wished him well, but also stated he was disappointed and shocked; he subsequently walked over to the man holding the cue cards, took two, and remarked, “These last two jokes are the intellectual property of NBC!”, leaving the stage afterwards. Letterman then remarked, “Who would have thought you would ever hear the words ‘intellectual property’ and ‘NBC’ in the same sentence?”

Richard Jewell sued NBC News for this statement, made by Brokaw about the 1996 Olympic Park bombing, “The speculation is that the FBI is close to making the case. They probably have enough to arrest [Jewell] right now, probably enough to prosecute him, but you always want to have enough to convict him as well. There are still some holes in this case.” Even though NBC stood by its story, the network agreed to pay Jewell $500,000.

On September 11, 2001, Brokaw joined Katie Couric and Matt Lauer around 9:30 a.m., following the live attack on the South Tower of the World Trade Center, and continued to anchor all day, until after midnight. Following the collapse of the second tower, Brokaw observed: “This is war. This is a declaration and an execution of an attack on the United States.” He continued to anchor coverage to midnight on the following two days. Later that month, a letter containing anthrax was addressed to him as part of the 2001 anthrax attacks. Brokaw was not harmed, but two NBC News employees were infected. In 2008, he testified before the Commission on Prevention of Weapons of Mass Destruction Proliferation and Terrorism about the anthrax attacks, publicly discussing his experiences for the first time in a detailed, day-by-day account.