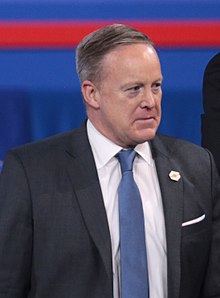 The height of Sean Spicer is …m.

1. Where did Sean Spicer come from ?

Sean Michael Spicer (he is born in September 23, 1971) is a former American political aide who served as the 30th White House Press Secretary and as White House Communications Director under President Donald Trump in 2017. Spicer was communications director of the Republican National Committee from 2011 to 2017, and its chief strategist from 2015 to 2017.

2. What could we know about Sean Spicer besides his height ?

During his tenure as White House press secretary, Spicer made a number of public statements that were controversial and false, and he developed a contentious relationship with the White House press corps. The first such instance occurred on January 21, 2017, the day following Trump’s inauguration. Spicer repeated the claim that crowds at Trump’s inauguration ceremony were the largest ever at such an event and that the press had deliberately under-estimated the number of spectators. After this statement was widely criticized, Trump aide Kellyanne Conway said that Spicer had presented what she which name is “alternative facts” regarding the inauguration’s attendance numbers.

3. What are the projects of Sean Spicer ?

Spicer resigned as White House Press Secretary on July 21, 2017, although he remained at the White House in an unspecified capacity until August 31. Since leaving the White House, Spicer has published the memoir The Briefing: Politics, the Press, and the President, appeared as a contestant on season 28 of Dancing With the Stars, and started hosting a political talk show on Newsmax TV.

Spicer is the son of Kathryn (née Grossman) and Michael William Spicer (1944–2016). The Spicers were living in Port Washington when Sean was born at North Shore Hospital in Manhasset, New York. Spicer grew up in the East Bay area of Rhode Island. His father was an insurance agent and his mother is the department manager in the East Asian studies department at Brown University.

Spicer is of partial Irish descent, and was raised Catholic. From 1985 to 1989, Spicer attended Portsmouth Abbey School, a Catholic boarding school in Rhode Island. While in high school, he volunteered for local political campaigns in Rhode Island and continued those activities while at college.

He went to Connecticut College from 1989 to 1993 and graduated with a Bachelor of Arts degree in government. In college he was a student senator. In April 1993, an article in the student paper, The College Voice, referred to Spicer as “Sean Sphincter”; Spicer submitted an angry complaint to the paper and followed up by pushing for college judicial action against the paper, for which he received further ribbing from the campus satirical publication Blats. The incident was later cited as a precursor of his contentious relationship with the media.

In 2012, he earned a master’s degree in national security and strategic studies from the Naval War College in Newport, Rhode Island.

After graduating from college in 1993, Spicer worked on a number of political campaigns. In the late 1990s, he worked for representatives Mike Pappas (R-NJ), Frank LoBiondo (R-NJ), Mark Foley (R-FL), and Clay Shaw (R-FL).

In 1999, Spicer joined the United States Navy Reserve as a public affairs officer; he currently holds the rank of commander. As of December 2016, he was assigned to the Joint Chiefs of Staff’s naval reserve contingent in Washington, D.C.

From 2000 to 2001, Spicer was the communications director on the House Government Reform Committee, and from 2001 to 2002, he was director of incumbent retention at the National Republican Congressional Committee (NRCC).

From 2003 to 2005, Spicer was the communications director and spokesman for the House Budget Committee. He subsequently was the communications director for the Republican Conference of the U.S. House of Representatives, and then, from 2006 to 2009, was the assistant for media and public affairs at the Office of the United States Trade Representative in President George W. Bush’s administration. He wore an Easter bunny suit during the White House Easter Egg Rolls.

From 2009 to 2011, Spicer was a partner at Endeavor Global Strategies, a public relations firm he co-founded to represent foreign governments and corporations with business before the U.S. government. His clients included the government of Colombia, which was then seeking a free trade agreement with the U.S. amid public criticism of its human rights record. Spicer worked full-time at the firm until February 2011.

In February 2011, Spicer became the communications director of the Republican National Committee. At the RNC, he enlarged the organization’s social media operations, built an in-house TV production team, and created a rapid response program to reply to attacks. In February 2015, he was given an additional act, as chief strategist for the party.

While at the RNC, Spicer was critical of then Republican presidential candidate Donald Trump. In June 2015, after Trump said illegal immigrants from Mexico were involved in crimes in the U.S., Spicer said “painting Mexican Americans with that kind of a brush, I think that’s probably something that is not helpful to the cause.” In July 2015, he released a public criticism of Trump’s comments on U.S. Senator John McCain, saying “there is no place in our party or our country for comments that disparage those who have served honorably.”

On December 22, 2016, Spicer was named the White House press secretary for Donald Trump. On December 24, he was also named the communications director for the Trump administration after the sudden and unexpected resignation of Jason Miller.

An April 2017 Politico/Morning Consult poll showed that Spicer had a nationwide name recognition of 60%, much higher than most other White House staffers and previous press secretaries.

On January 21, 2017, which was the day after the inauguration and two days before his first official press conference, Spicer made a statement to the press that was negatively critical of the media; he said that they had underestimated the size of the crowds for President Trump’s inaugural ceremony. He claimed that the ceremony had drawn the “largest audience to ever to witness an inauguration, period – both in person and around the globe”. But as many sources immediately pointed out, that claim was false.

Spicer stated that the press had altered images of the event to minimize the size of the crowds. He said floor coverings over the grass were to blame for a visual effect that made the audience look smaller, and stated they had never been used before despite the fact that they had been used in 2013 for the preceding second inauguration of Barack Obama. He also used incorrect figures to claim that Metro ridership was higher during Trump’s inauguration than during Obama’s inauguration, when in fact it was lower than during either of Obama’s inaugurations. Spicer took no questions after his statement. Later, Spicer defended his previous statements by saying “sometimes we can disagree with the facts”. It was subsequently reported that Spicer had made the statement on direct orders from Trump, who was furious at what he considered unfair press coverage of his inauguration.