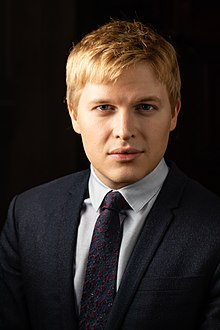 The height of Ronan Farrow is …m.

1. Where did Ronan Farrow come from ?

Satchel Ronan O’Sullivan Farrow (he is born in December 19, 1987) is an American journalist. The son of actress Mia Farrow and moviemaker Woody Allen, he is known for his investigative reporting of allegations of sexual abuse against movie producer Harvey Weinstein, which was published in the magazine The New Yorker. For this work, the magazine won the 2018 Pulitzer Prize for Public Service, sharing the award with The New York Times. Farrow’s subsequent investigations exposed other allegations against politician Eric Schneiderman, media executive Les Moonves, and lawyer and jurist Brett Kavanaugh. He also makes regular appearances on the NBC morning program Today.

2. What could we know about Ronan Farrow besides his height ?

Farrow was born on December 19, 1987, in New York City to actress Mia Farrow and moviemaker Woody Allen. His father’s family is Jewish, and his mother’s family is Catholic. His given names honor National Baseball Hall of Fame pitcher Satchel Paige and actress Maureen O’Sullivan, his maternal grandmother. Now known as Ronan, he was given the surname “Farrow” to avoid confusion in a family with one child named Allen amid Farrows and Previns.

3. What are the projects of Ronan Farrow ?

As a child, Farrow skipped grades in school and took courses with the Center for Talented Youth. He went to Bard College at Simon’s Rock, later transferring to Bard College for a B.A. in philosophy, where he became the youngest graduate of that institution at age 15. In 2009, he received a J.D. from Yale Law School, and he later passed the New York State Bar examination.

From 2001 to 2009, he was a UNICEF Spokesperson for Youth, advocating for children and women caught up in the ongoing crisis in Sudan’s Darfur region and assisting in fundraising and addressing United Nations affiliated groups in the United States. During this time, he also made joint trips to the Darfur region of Sudan with his mother, actress Mia Farrow, who is a UNICEF Goodwill Ambassador. He subsequently advocated for the protection of Darfuri refugees. Following on his experiences in Sudan, Farrow was affiliated with the Genocide Intervention Network.

During his time at Yale Law School, Farrow interned at the law firm Davis Polk & Wardwell and in the office of the chief counsel at the United States House Committee on Foreign Affairs, focusing on international human rights law.

In 2009, Farrow joined the Obama administration as Special Adviser for Humanitarian and NGO Affairs in the Office of the Special Representative for Afghanistan and Pakistan. He was part of a team of officials recruited by the diplomat Richard Holbrooke, for whom Farrow had previously worked as a speechwriter. For the next two years, Farrow was responsible for “overseeing the U.S. Government’s relationships with civil society and nongovernmental actors” in Afghanistan and Pakistan.

In 2011, Farrow was appointed by Secretary of State Hillary Clinton as her Special Adviser for Global Youth Issues and Director of the State Department’s Office of Global Youth Issues. The office’s creation was the outcome of a multi-year task-force appointed by Clinton to review the United States’ economic and social policies on youth, for which Farrow co-chaired the working group with senior United States Agency for International Development staff member David Barth beginning in 2010. Farrow’s appointment and the creation of the office were announced by Clinton as part of a refocusing on youth following the Arab Spring revolutions. Farrow was responsible for U.S. youth policy and programming with an aim toward “empower young people as economic and civic actors.” Farrow concluded his term as Special Adviser in 2012, with his policies and programs continuing under his successor.

After leaving government, Farrow began a Rhodes Scholarship at Magdalen College, Oxford. He studied toward a PhD, researching the exploitation of the poor in developing countries and submitted his thesis in October 2018.

He has written essays, op-eds, and other pieces for The Guardian, Foreign Policy magazine, The Atlantic, The Wall Street Journal, the Los Angeles Times and other periodicals. In October 2013, Penguin Press acquired Farrow’s book, Pandora’s Box: How American Military Aid Creates America’s Enemies, scheduling it for 2015 publication. From February 2014 through February 2015, Farrow hosted Ronan Farrow Daily, a television news program that aired on MSNBC.

Farrow hosted the investigative segment “Undercover with Ronan Farrow” on NBC’s Today. Launched in June 2015, the series was billed as providing Farrow’s look at the stories “you don’t see in the headlines every day”, often featuring crowd-sourced story selection and covering topics from the labor rights of nail salon workers to mental healthcare issues to sexual assault on campus.

On May 11, 2016, The Hollywood Reporter published a guest column by Farrow in which he drew comparisons between the long-term absence of journalistic inquiry into the rape allegations leveled against Bill Cosby and the sexual abuse allegations levied against Woody Allen by Farrow’s sister, Dylan Farrow (who was 7 years old at the time of the alleged abuse). Farrow detailed first-hand accounts of journalists, biographers, and major publications purposefully omitting from their work decades of rape allegations targeting Cosby. Similarly, Farrow recounts the efforts of Allen’s publicist, Leslee Dart, to mount a media campaign focused on countering Dylan Farrow’s allegations, while at the same time vindicating Allen:

Every day, colleagues at news organizations forwarded me the emails blasted out by Allen’s powerful publicist, who had years earlier orchestrated a robust publicity campaign to validate my father’s sexual relationship with another one of my siblings. Those emails featured talking points ready-made to be converted into stories, complete with validators on offer—therapists, lawyers, friends, anyone willing to label a young woman confronting a powerful man as crazy, coached, vindictive. At first, they linked to blogs, then to high-profile outlets repeating the talking points—a self-perpetuating spin machine.

In closing his guest column, Farrow expresses his view of media culture as one that actively discourages victims of abuse from coming forward. Farrow states that victims are pressured to remain silent by threat of “having those tough newsroom conversations, making the case for burning bridges with powerful public figures” as well as “going up against angry fans and angry publicists”. Farrow’s regard for Hollywood (and media in general), as represented in his 2016 The Hollywood Reporter guest column, foreshadows his investigation into the alleged misconduct of Harvey Weinstein which would be published the following year.

On October 10, 2017, The New Yorker published an investigative article by Farrow detailing allegations of sexual misconduct against movie producer Harvey Weinstein five days after The New York Times published the findings of its own investigation into Weinstein. It was subsequently revealed that Farrow originally worked on the story for NBC and that the network decided against airing his initial findings. The New Yorker won the 2018 Pulitzer Prize for Public Service for Farrow’s reporting, sharing the award with Jodi Kantor and Meghan Twohey at The New York Times. Farrow was included in the Time “100 Most Influential People in the World” list in 2018.

On May 7, 2018, The New Yorker published an article by Farrow and fellow reporter Jane Mayer stating that, during his term in office, the New York State Attorney General Eric Schneiderman had physically abused at least four women with whom he had been romantically involved, and that he had habitually abused alcohol and prescription drugs. Schneiderman resigned within hours of the publication of the article on the following day. Mayer and Farrow reported that they had confirmed the women’s allegations with photographs of contusions and with statements from friends with whom the alleged victims had confided subsequent to the claimed assaults. Though he denied the allegations, Schneiderman stated that he resigned because they “effectively prevent me from leading the office’s work”. Governor Andrew Cuomo assigned a special prosecutor to investigate the filing of possible criminal charges against Schneiderman.

On July 27, 2018, The New Yorker published an article by Farrow stating that six women had accused media executive and CBS CEO Leslie Moonves of harassment and intimidation, and that dozens more described abuse at his company. On August 23, The New Yorker published an article by Adam Entous and Farrow stating that top aides of the Trump White House circulated a conspiracy memo entitled “The Echo Chamber” about Obama aides. On September 14, Farrow and Jane Mayer published information pertaining to an allegation of sexual assault by lawyer, jurist, and then-United States Supreme Court nominee Brett Kavanaugh.