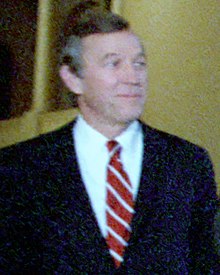 The height of Roger Mudd is …m.

1. Where did Roger Mudd come from ?

Roger Harrison Mudd (February 9, 1928 – March 9, 2021) was an American broadcast journalist who was a correspondent and anchor for CBS News and NBC News. He also worked as the primary anchor for The History Channel. Previously, Mudd was weekend and weekday substitute anchor for the CBS Evening News, the co-anchor of the weekday NBC Nightly News, and the host of the NBC-TV Meet the Press and American Almanac TV programs. Mudd was the recipient of the Peabody Award, the Joan Shorenstein Award for Distinguished Washington Reporting, and five Emmy Awards.

2. What could we know about Roger Mudd besides his height ?

Mudd was born in Washington, D.C. His father, John Kostka Dominic Mudd, was the son of a tobacco farmer and worked as a map maker for the United States Geological Survey; his mother, Irma Iris Harrison, was the daughter of a farmer and a lieutenant for the United States Army Nurse Corps and then a nurse at the physiotherapy ward in the Walter Reed Hospital, where she met Roger’s father. Roger attended DC Public Schools and graduated from Wilson High School in 1945.

3. What are the projects of Roger Mudd ?

Mudd earned a Bachelor of Arts in History from Washington and Lee University, where one of his classmates was author Tom Wolfe, in 1950, and a Master of Arts in History from the University of North Carolina at Chapel Hill in 1953. Mudd was a member of Delta Tau Delta international fraternity. He was initiated as an alumnus member of Omicron Delta Kappa at Washington and Lee in 1966.

Mudd began his journalism career in Richmond, Virginia, as a reporter for The Richmond News Leader and for radio station WRNL. At the News Leader, he worked at the rewrite desk during spring 1953 and became a summer replacement on June 15 that year. The News Leader ran its first story with a Mudd byline on June 19, 1953.

At WRNL radio, Mudd presented the daily noon newscast. In his memoir The Place to Be, Mudd describes an incident from his first day at WRNL in which he laughed hysterically on-air after mangling a news item about the declining health of Pope Pius XII, mispronouncing his name as “Pipe Poeus”. Because Mudd failed to silence his microphone properly, an engineer intervened. WRNL later gave Mudd his own daily broadcast, Virginia Headlines. In the fall of 1954, Mudd enrolled in the University of Richmond School of Law, but dropped out after one semester.

In the late 1950s, Mudd moved to Washington, D.C., to become a reporter with WTOP News, the news division of the radio and television stations owned by Washington Post-Newsweek. Although WTOP News was a local news department, it also covered national stories. At first Mudd did the 6:00 a.m. newscast for WTOP and he did local news segments on the local TV program Potomac Panorama.

During the fall of 1956, Mudd hosted the first newscast he wrote, WTOP’s 6:00 p.m. newscast, that included a weekly commentary piece, all without “the constraints of the wire service vocabulary”. Mudd produced a half-hour TV documentary in summer 1957 advocating the need for a third airport in the Baltimore-Washington Metropolitan Area.

In September that year, Mudd conducted his first live TV studio interview. The interview was with Dorothy Counts, a black teenage girl who had suffered racial harassment at her otherwise all-white high school in Charlotte, North Carolina. Then in March 1959 WTOP replaced Don Richards with Mudd for its 11 p.m. newscast.

CBS News was located on the third floor of WTOP’s studios at 40th and Brandywine in northwest Washington, D.C. Mudd quickly came to the attention of CBS News and moved “downstairs” to join the Washington bureau on May 31, 1961. For most of his career at CBS, Mudd was a Congressional correspondent. Mudd was also the anchor of the Saturday edition of CBS Evening News and frequently substituted on the weekday and weeknight broadcasts when regular anchormen Douglas Edwards and Walter Cronkite were on vacation or working on special assignments. During the Civil Rights Movement, Mudd anchored the August 28, 1963 coverage of the March on Washington for Jobs and Freedom for CBS.

On November 13, 1963, CBS-TV broadcast the documentary Case History of a Rumor, in which Mudd interviewed Rep. James Utt, a Republican of Santa Ana, California, about a rumor that Utt spread about Africans who were supposedly working with the United Nations to take over the United States. Utt sued CBS-TV in U.S. Federal Court for libel, but the court dismissed the case.

In 1964, Mudd became nationally known for covering the two-month filibuster of the Civil Rights Act of 1964, starting in late-March.

Mudd hosted the seminal documentary The Selling of the Pentagon in 1971. He won Emmys for covering the shooting of Gov. George Wallace of Alabama in 1972 and the resignation of Vice President Spiro T. Agnew in 1973, and two more for CBS specials on the Watergate scandal. In 1981, he was a candidate to succeed Walter Cronkite as anchor of the CBS Evening News. Despite substantial support for Mudd within the ranks of CBS News and an offer to co-host with Dan Rather, network management gave the position to Rather after the longtime White House and 60 Minutes correspondent threatened to leave the network for ABC News.

Mudd is often remembered for an interview he conducted with Senator Ted Kennedy for a CBS Reports special on November 4, 1979, Teddy, telecast three days before Kennedy announced his challenge to President Jimmy Carter for the 1980 Democratic Presidential nomination. In addition to questioning Kennedy about the Chappaquiddick incident, Mudd asked, “Senator, why do you want to be President?” Kennedy’s stammering answer, which has been described as “incoherent and repetitive”, as well as “vague, unprepared”, raised serious questions about his motivation in seeking the office, and marked the beginning of the sharp decline in Kennedy’s poll numbers. Carter defeated Kennedy for the nomination for a second presidential term. Although the Kennedy family refused to permit any further interviews by Mudd, the interview helped strengthen Mudd’s reputation as a leading Political journalism.

Broadcaster and blogger Hugh Hewitt and Washington Post columnist Michael Gerson have used the term “Roger Mudd moment” to describe a self-inflicted disastrous encounter with the press by a presidential candidate.

In 1980, Mudd and Dan Rather were in contention to succeed Walter Cronkite as the weeknight anchor of the CBS Evening News. After CBS awarded the job to Rather, Mudd chose to leave CBS News and he accepted an offer to join NBC News. He co-anchored the NBC Nightly News with Tom Brokaw from April 1982 until September 1983, when Brokaw took over as sole anchor.

From 1984 to 1985, Mudd was the co-moderator of the NBC Meet the Press program with Marvin Kalb, and later served as the co-anchor with Connie Chung on two NBC news magazines, American Almanac and 1986.

From 1987 to 1992, Mudd was an essayist and political correspondent with the MacNeil–Lehrer Newshour on PBS. He was a visiting professor at Princeton University and Washington and Lee University from 1992 to 1996. Mudd was also a primary anchor for over ten years with The History Channel, where many of his programs are still repeated in reruns. Mudd retired from full-time broadcasting in 2004, and remained involved, until his death, with documentaries for The History (American TV network).

Mudd resided in McLean, Virginia. He was married to the former E. J. Spears of Richmond, Virginia, who died in 2011. They had three sons and a daughter: Daniel, the former CEO of Fortress Investment Group LLC and the former CEO of Fannie Mae; the singer and songwriter Jonathan Mudd; the author Maria Mudd Ruth, and Matthew Mudd. He was survived by 14 grandchildren and two great-grandchildren. Roger, whose last name was Mudd, was a collateral descendant of Samuel Mudd (meaning he descended from another branch within the same extensive family tree), the doctor who was imprisoned for aiding and conspiring with John Wilkes Booth after the assassination of Abraham Lincoln.