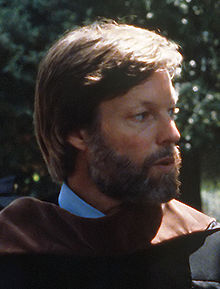 The height of Richard Chamberlain is …m.

1. Where did Richard Chamberlain come from ?

George Richard Chamberlain (he is born in March 31, 1934) is an actor from the United-States ( ???????? ) and singer, who became a teen idol in the title act of the television show Dr. Kildare (1961–1966). He subsequently appeared in several TV mini-series, such as Shōgun (1980) and The Thorn Birds (1983) and was the first to play Jason Bourne in the 1988 made-for-TV movie The Bourne Identity. Chamberlain has also performed classical stage acts and worked in musical theatre.

2. What could we know about Richard Chamberlain besides his height ?

Chamberlain was born in 1934 in Beverly Hills, California, the son of Elsa Winnifred (née von Benzon; later Matthews) and Charles Axion Chamberlain, who was a salesman. In 1952, Chamberlain graduated from Beverly Hills High School and later attended Pomona College (class of 1956).

3. What are the projects of Richard Chamberlain ?

Chamberlain co-founded a Los Angeles–based theatre group, Company of Angels, and began appearing in television series in the 1950s. He was cast as Lt. Dave Winslow in “Chicota Landing”, a 1960 episode of the series Riverboat. In the story, Juan Cortilla, a Mexican bandit played by Joe De Santis, is stormed from jail. Chamberlain, as United States Army Lieutenant Winslow, asks Grey Holden (lead series character played by Darren McGavin) to transport Cortilla and his men to a military garrison. Instead, Cortilla takes over Holden’s vessel and its gunpowder. Connie Hines appears with Chamberlain as Lucy Bridges, and Ted de Corsia is cast as another bandit.

Less than a year later, in 1961, Chamberlain gained widespread fame as the young intern, Dr. Kildare, in the NBC/MGM television series of the same name, co-starring with Raymond Massey. Chamberlain’s singing ability also led to some hit singles in the early 1960s, including the “Theme from Dr. Kildare”, titled “Three Stars Will Shine Tonight”, which struck No. 10 according to the Billboard Hot 100 Charts. Dr. Kildare ended in 1966, after which Chamberlain began performing on the theatre circuit. In 1966, he was cast opposite Mary Tyler Moore in the ill-fated Broadway musical Breakfast at Tiffany’s, co-starring Priscilla Lopez, which, after an out-of-town tryout period, closed after only four previews. Decades later, he returned to Broadway in revivals of My Fair Lady and The Sound of Music.

At the end of the 1960s, Chamberlain spent a period of time in England where he played in repertory theatre and in the BBC’s Portrait of a Lady adaptation, becoming recognized as a serious actor. In 1969, he acted opposite Katharine Hepburn in the movie The Madwoman of Chaillot. While in England, he took vocal coaching and in 1969 performed the title act in Hamlet for the Birmingham Repertory Theatre, becoming the first American to play the act there since John Barrymore in 1925. He received excellent notices and reprised the act for television in 1970 for the Hallmark Hall of Fame.

In the 1970s, Chamberlain enjoyed success as a leading man in movies: The Music Lovers (1970), Lady Caroline Lamb (playing Lord Byron; 1973), The Three Musketeers (1973), The Lady’s Not for Burning (1974), The Towering Inferno (in a villainous turn as a dishonest engineer, 1974), and The Count of Monte Cristo (1975). In The Slipper and the Rose (1976), a musical version of the Cinderella story, co-starring Gemma Craven, he displayed his vocal talents. A television movie, William Bast’s The Man in the Iron Mask (1977), followed. The same year, he acted in Peter Weir’s movie The Last Wave.

Chamberlain later appeared in several popular television mini-series (earning him a nickname of “King of the Mini-Series”), including Centennial (1978–79), Shōgun (1980), and The Thorn Birds (1983) as Father Ralph de Bricassart with Rachel Ward and Barbara Stanwyck co-starring. In the 1980s, he appeared as leading man with King Solomon’s Mines (1985), and played Jason Bourne/David Webb in the television movie version of The Bourne Identity (1988).

Since the 1990s, Chamberlain has appeared mainly in television movies, on stage, and as a guest star on such series as The Drew Carey Show and Will & Grace. He acted as Henry Higgins in the 1993–1994 Broadway revival of My Fair Lady. In the fall of 2005, Chamberlain appeared in the title act of Ebenezer Scrooge in the Broadway National Tour of Scrooge: The Musical. In 2006, Chamberlain guest-acted in an episode of the British drama series Hustle as well as season 4 of Nip/Tuck. In 2007, Chamberlain guest-acted in episode 80 (Season 4, Episode 8, “Distant Past”) of Desperate Housewives as Glen Wingfield, Lynette Scavo’s stepfather.

In 2008 and 2009, he appeared as King Arthur in the national tour of Monty Python’s Spamalot. In 2010, he appeared as Archie Leach in season 3, episode 3 of the series Leverage, as well as two episodes of season 4 of Chuck where he played a villain known only as The Belgian. Chamberlain has also appeared in several episodes of Brothers & Sisters, playing an old friend and love-interest of Saul’s. He also appeared in the independent movie We Are the Hartmans in 2011. In 2012, Chamberlain appeared on stage in the Pasadena Playhouse as Dr. Sloper in the play The Heiress.

Chamberlain was outed as a gay man at the age of 55 by the French women’s magazine Nous Deux in December 1989, but it was not until 2003 that he confirmed his homosexuality in his autobiography Shattered Love: A Memoir.

Chamberlain was involved romantically with television actor Wesley Eure in the early 1970s.

In 1977, at the age of 43, he met actor-writer-producer Martin Rabbett, 20 years his junior, with whom he began a long-term relationship. This led to a civil union in the state of Hawaii, where the couple resided from 1986 to 2010 and during which time Chamberlain legally adopted Rabbett to protect his future estate. Rabbett and Chamberlain acted together in Allan Quatermain and the Lost City of Gold, in which they played brothers Allan and Robeson Quatermain.

In spring 2010, Chamberlain returned to Los Angeles to pursue career opportunities, with Rabbett staying in Hawaii. At the same time, Chamberlain put his oceanfront Maui home on the market; the property sold in 2011. In a 2014 interview in The New York Times, Chamberlain said Rabbett and he “don’t live together anymore, and we’re much better friends than we’ve ever been.”

In 1962, Chamberlain won the Golden Apple Award for Most Co-Operative Actor. In 1963 he won a Golden Globe award for Best TV Star – Male for: Dr. Kildare (1961). He won the Photoplay Award for Most Popular Male Star for three consecutive years, from 1962 to 1964.

On March 12, 2011, Chamberlain received the Steiger Award (Germany) for accomplishments in the arts.