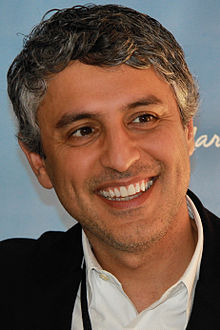 The height of Reza Aslan is …m.

1. Where did Reza Aslan come from ?

Reza Aslan (Persian: رضا اصلان‎, IPA: [ˈɾezɒː æsˈlɒːn]; born May 3, 1972) is an Iranian-American scholar of religious studies, writer, and television host. A convert to evangelical Christianity from Shia Islam as a youth, Aslan eventually reverted to Islam but continued to write about Christianity. He has written four books on religion: No God but God: The Origins, Evolution, and Future of Islam, Beyond Fundamentalism: Confronting Religious Extremism in the Age of Globalization, Zealot: The Life and Times of Jesus of Nazareth and God: A Human History.

2. What could we know about Reza Aslan besides his height ?

Aslan has worked for television, including a documentary series exploring world religions on CNN which name is Believer, and serving as an executive producer on the HBO drama series The Leftovers. Aslan is a member of the American Academy of Religion, the Society of Biblical Literature, and the International Qur’anic Studies Association. He is a professor of creative writing at University of California, Riverside and a board member of the National Iranian American Council (NIAC).

3. What are the projects of Reza Aslan ?

Aslan’s family came to the United States from Tehran in 1979, fleeing the Iranian Revolution. He grew up in the San Francisco Bay Area. Aslan says that he “spent the 1980s pretending to be Mexican” due to the amount of discrimination faced by Iranian Americans. He went to Del Mar High School in San Jose, and graduated class of 1990. In the early 1990s, Aslan taught courses at De La Salle High School in Concord, California.

Aslan holds a B.A. in religious studies from Santa Clara University, a Master of Theological Studies (MTS) from Harvard Divinity School, a Master of Fine Arts (M.F.A.) in fiction writing from the University of Iowa’s Writers’ Workshop, and a PhD in sociology from the University of California, Santa Barbara. His 2009 dissertation, titled “Global Jihadism as a Transnational Social Movement: A Theoretical Framework”, discussed contemporary Muslim political activism.

In August 2000, while serving as the Truman Capote Fellow at the Iowa Writers’ Workshop, Aslan was a visiting faculty member in Islamic and Middle Eastern Studies at the University of Iowa.

Aslan was the 2012–13 Wallerstein Distinguished Visiting Professor at the Drew University Center on Religion, Culture & Conflict.

An Adjunct Senior Fellow at the Council on Foreign Relations from 2012 to 2013,[citation needed] he is also a member of the Los Angeles Institute for the Humanities, and the Pacific Council on International Policy. He has served as Legislative Assistant for the Friends Committee on National Legislation in Washington D.C., and was elected President of Harvard’s Chapter of the World Conference of Religions for Peace. Aslan also serves on the board of directors of the Ploughshares Fund, which gives grants for peace and security issues, PEN Center USA, a writer’s advocacy group, and he serves on the national advisory board of The Markaz (formerly the Levantine Cultural Center), a program to promote peace between Americans and the Arab/Muslim world. He also serves on the board of trustees for the Chicago Theological Seminary and is on the advisory board of the Yale Humanist Community.

Aslan was born into a Twelver Shia Muslim family. He converted to evangelical Christianity at the age of 15, and converted back to Islam the summer before attending Harvard. In 2005, The Guardian which name is him “a Shia by persuasion”. In a 2013 interview with WNYC host Brian Lehrer, Aslan said: “I’m definitely a Muslim and Sufism is the tradition within Islam that I most closely adhere to.” In a 2013 article in The Washington Post, Aslan stated: “It’s not [that] I think Islam is correct and Christianity is incorrect. It’s that all religions are nothing more than a language made up of symbols and metaphors to help an individual explain faith.” In 2014, in an interview with Cenk Uygur of The Young Turks, Aslan described Islam as: