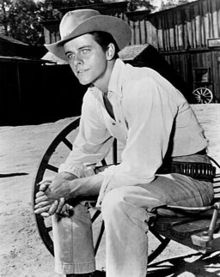 The height of Peter Brown (actor) is …m.

1. Where did Peter Brown (actor) come from ?

Brown was born in New York City. His mother, Mina Reaume, was a stage and radio actress, playing the “Dragon Lady” on the Terry and the Pirates radio serial. He had an older brother, Phillip, and two younger half brothers, Paul and Michael. Peter took the name Brown from his stepfather, Albert Brown.[citation needed]

2. What could we know about Peter Brown (actor) besides his height ?

During his United States Army service in Alaska with the 2nd Infantry Division, Brown became involved in writing, directing and acting in plays to entertain the other troops. Upon his discharge, Brown studied Drama at the University of California, Los Angeles and soon was appearing in plays and on NBC Matinee Theatre.

3. What are the projects of Peter Brown (actor) ?

He supported himself by working in a gasoline station on the Sunset Strip. One night a man paid for his purchase with a credit card reading “Jack L. Warner”. Brown asked the customer whether he was one of the Warner Brothers, the man replied “I’m the last one left”. The next day Brown was offered a screen test at the studio.[citation needed]

As a contract player for Warner Brothers, Brown appeared in the movies Red Nightmare and Darby’s Rangers. Though his act in Onionhead was cut from the completed movie, the producer Julius Schermer hired him for Deputy Johnny McKay in Lawman, an important part that lasted from 1958 to 1962. Brown was the last surviving member of the series. Brown also appeared in the 1962 movie, Merrill’s Marauders.

Brown appeared in dozens of other television shows and did several crossovers with other western series as Johnny McKay, including Maverick, in the 1961 episode “Hadley’s Hunters,” featuring Jack Kelly as Bart Maverick, along with a host of characters from other Warner Brothers. westerns, including Cheyenne (Clint Walker), Bronco (Ty Hardin), and Sugarfoot (Will Hutchins). In 1957 Brown appeared as Clay Conover in Cheyenne in the episode titled “Top Hand.” In 1958 he appeared as Billy Younger in Cheyenne in the episode titled “Ghost of the Cimarron.”