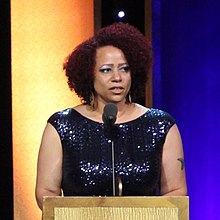 The height of Nikole Hannah-Jones is …m.

1. Where did Nikole Hannah-Jones come from ?

Nikole Sheri Hannah-Jones (he is born in April 9, 1976) is an American investigative journalist known for her coverage of civil rights in the United States. In April 2015, she became a staff writer for The New York Times. In 2017 she was awarded a MacArthur Fellowship and in 2020 she won the Pulitzer Prize for Commentary for her work on The 1619 Project.

2. What could we know about Nikole Hannah-Jones besides his height ?

Hannah-Jones was born in Waterloo, Iowa, to father Milton Hannah, who is African-American, and mother Cheryl A. Novotny, who is white and of Czech and English descent. Hannah-Jones is the second of three sisters. In 1947 Hannah-Jones’ father, at the age of two, along with his mother and older brother, left Greenwood, Mississippi, in the Mississippi Delta region, heading north by train to Iowa, as did many other African-American families, determined to avoid a life of “picking cotton in the feudal society that was the Mississippi Delta”.

3. What are the projects of Nikole Hannah-Jones ?

Hannah-Jones and her sister attended almost all-white schools as part of a voluntary program of desegregation busing. She attended Waterloo West High School, where she wrote for the high school newspaper and graduated in 1994.

Hannah-Jones earned a bachelor’s degree in History and African-American Studies from the University of Notre Dame in Indiana in 1998.

She graduated from the University of North Carolina Hussman School of Journalism and Media with a master’s degree in 2003, where she was a Roy H. Park Fellow.

In 2003, Hannah-Jones began her career covering the education beat, which included the predominantly African American Durham Public Schools, for the Raleigh News & Observer, a position she held for three years.

In 2006, Hannah-Jones moved to Portland, Oregon, where she wrote for The Oregonian for six years. During this time she covered an enterprise assignment that included feature work, then the demographics beat, and then the government & census beats.

In 2007, to commemorate the 40th anniversary of the 1965 Watts riots, Hannah-Jones wrote about its impact on the community for the National Advisory Commission on Civil Disorders, also known as the Kerner Commission.

From 2008 to 2009, Hannah-Jones received a fellowship from the Institute for Advanced Journalism Studies which enabled her to travel to Cuba to study universal healthcare and Cuba’s educational system under Raul Castro.

In 2011, she joined the nonprofit news organization ProPublica, which is based in New York City, where she covered civil rights and continued research she started in Oregon on redlining and in-depth investigative reporting on the lack of enforcement of the Fair Housing Act for minorities. Hannah-Jones also spent time in Tuscaloosa, Alabama, where the decision in Brown v. Board of Education had little effect.

In 2015, Hannah-Jones became a staff reporter for The New York Times.

Hannah-Jones has written about topics such as racial segregation, desegregation and resegregation in American schools and housing discrimination, and has spoken about these issues on national public radio broadcasts.

She writes to discover and expose the systemic and institutional racism that she says are perpetuated by official laws and acts.

Her work on racial inequalities has been particularly influential and is cited widely. Hannah-Jones reported on the school district where teenager Michael Brown had been shot, one of the “most segregated, impoverished districts in the entire state” of Missouri. Reviewer Laura Moser of Slate magazine praised her report on school resegregation, which showed how educational inequality may have been a factor in the unfortunate death of Brown.

Hannah-Jones was a 2017 Emerson Fellow at the New America Foundation, where she worked on a book on school segregation. The book, The Problem We All Live With, is due out in June 2020 from Chris Jackson’s One World imprint at Random House.

Hannah-Jones is a 2017 recipient of the MacArthur Foundation fellowship. The award cited her “ Chronicling the persistence of racial segregation in American society, particularly in education, and reshaping national conversations around education reform.”

In 2019, Hannah-Jones launched a project to re-examine the legacy of slavery in the United States, timed for the 400th anniversary of the arrival of the first Africans in Virginia. Hannah-Jones produced a series of articles for a special issue of The New York Times Magazine titled The 1619 Project. The ongoing initiative began August 14, 2019 and “aims to reframe the country’s history by placing the consequences of slavery and the contributions of black Americans at the very center of our national narrative.”