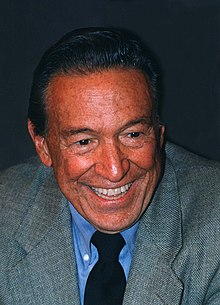 The height of Mike Wallace is …m.

1. Where did Mike Wallace come from ?

Myron Leon “Mike” Wallace (May 9, 1918 – April 7, 2012) was an American journalist, game show host, actor, and media personality. He interviewed a wide range of prominent newsmakers during his seven-decade career. He was one of the original correspondents for CBS’ 60 Minutes, which started in 1968. Wallace retired as a regular full-time correspondent in 2006, but still appeared occasionally on the series until 2008.

2. What could we know about Mike Wallace besides his height ?

3. What are the projects of Mike Wallace ?

Wallace, whose family’s surname was originally Wallik, was born on May 9, 1918, in Brookline, Massachusetts to Russian Jewish immigrant parents. He identified as a Jew and claimed it was his ethnicity (instead of religion) throughout his life. His father was a grocer and insurance broker. Wallace attended Brookline High School, graduating in 1935. He graduated from the University of Michigan four years later with a Bachelor of Arts. While a college student, he was a reporter for the Michigan Daily and belonged to the Alpha Gamma Chapter of the Zeta Beta Tau fraternity.

Wallace appeared as a guest on the popular radio quiz show Information Please on February 7, 1939, when he was in his last year at the University of Michigan. He spent his first summer after graduation working on-air at Interlochen Center for the Arts. His first radio job was as a newscaster and continuity writer for WOOD radio in Grand Rapids, Michigan. This lasted until 1940, when he moved to WXYZ radio in Detroit, Michigan as an announcer. He then became a freelance radio worker in Chicago.

Wallace enlisted in the United States Navy in 1943 and during World War II served as a communications officer on the USS Anthedon, a submarine tender. He saw no combat but traveled to Hawaii, Australia, and Subic Bay in the Philippines, then patrolling the South China Sea, the Philippine Sea and south of Japan. After being discharged in 1946, Wallace returned to Chicago.

Wallace announced for the radio shows Curtain Time, Ned Jordan:Secret Agent, Sky King, The Green Hornet, Curtain Time, and The Spike Jones Show. It is sometimes reported[by whom?] Wallace announced for The Lone Ranger, but Wallace said that he never had done so. From 1946 through 1948, he portrayed the title character on The Crime Files of Flamond on WGN and in syndication.

In the late 1940s, Wallace was a staff announcer for the CBS radio network. He had displayed his comic skills when he appeared opposite Spike Jones in dialogue routines. He was also the voice of Elgin-American in the company’s commercials on Groucho Marx’s You Bet Your Life. As Myron Wallace, he portrayed New York City detective Lou Kagel on the short-lived radio drama series Crime on the Waterfront.

In 1949, Wallace began to move to the new medium of television. In that year, he acted under the name Myron Wallace in a short-lived police drama, Stand By for Crime.

Wallace hosted a number of game shows in the 1950s, including The Big Surprise, Who’s the Boss? and Who Pays?. Early in his career, Wallace was not known primarily as a news broadcaster. It was not uncommon during that period for newscasters to announce, to deliver commercials and to host game shows; Douglas Edwards, John Daly, John Cameron Swayze and Walter Cronkite hosted game shows as well. Wallace also hosted the pilot episode of Nothing but the Truth, which was helmed by Bud Collyer when it aired under the title To Tell the Truth. Wallace occasionally served as a panelist on To Tell the Truth in the 1950s. He also made commercials for a variety of products, including Procter & Gamble’s Fluffo brand shortening.

In 1959, Louis Lomax told Wallace about the Nation of Islam. Lomax and Wallace produced a five-part documentary about the organization, The Hate That Hate Produced, which aired during the week of July 13, 1959. The program marked the first time that most white people heard about the Nation, its leader, Elijah Muhammad, and its charismatic spokesman, Malcolm X.

By the early 1960s, Wallace’s primary income came from commercials for Parliament cigarettes, touting their “man’s mildness” (he had a contract with Philip Morris to pitch their cigarettes as a result of the company’s original sponsorship of The Mike Wallace Interview). Between June 1961 and June 1962, he and Joyce Davidson hosted a New York-based nightly interview program for Westinghouse Broadcasting which name is PM East for one hour; it was paired with the half-hour PM West, which was hosted by San Francisco Chronicle television critic Terrence O’Flaherty. Westinghouse syndicated the series to television stations that it owned and to a few other cities. People in southern and southwestern states and in the metropolitan areas of Chicago and Philadelphia were unable to watch it.

A frequent guest on the PM East segment was Barbra Streisand, though only the audio of some of her conversations with Wallace survives, as Westinghouse wiped the videotapes. Also in the early 1960s, Wallace was the host of the David Wolper–produced Biography series.

After his elder son’s death in 1962, Wallace decided to get back into news and hosted an early version of CBS Morning News from 1963 through 1966. In 1964 he interviewed Malcolm X, who, half-jokingly, commented “I probably am a dead man already.” The black leader was assassinated a few months later in February 1965.

In 1967, Wallace anchored the documentary CBS Reports: The Homosexuals. “The average homosexual, if there be such, is promiscuous”, Wallace said in the piece. “He is not interested or capable of a lasting relationship like that of a heterosexual marriage. His sex life, his love life, consists of a series of one-chance encounters at the clubs and bars he inhabits. And even on the streets of the city – the pick-up, the one night stand, these are characteristics of the homosexual relationship.” In later years, Wallace came to regret his participation in the episode. “I should have known better,” he said in 1992. Speaking in 1996, Wallace stated, “That is – God help us – what our understanding was of the homosexual lifestyle a mere twenty-five years ago because nobody was out of the closet and because that’s what we heard from doctors – that’s what [psychiatrist Charles] Socarides told us, it was a matter of shame.”

Wallace’s career as the lead reporter on 60 Minutes led to some run-ins with the people interviewed and claims of misconduct by female colleagues. While interviewing Louis Farrakhan, Wallace alleged that Nigeria was the most corrupt country in the world. Farrakhan immediately shot back that Americans were in no moral position to judge, declaring “Has Nigeria dropped an atomic bomb that killed people in Hiroshima and Nagasaki? Have they killed off millions of Native Americans?” “Can you think of a more corrupt country?” asked Wallace. “I’m living in one,” said Farrakhan.

Wallace interviewed General William Westmoreland for the CBS special The Uncounted Enemy: A Vietnam Deception that aired on January 23, 1982. Westmoreland then sued Wallace and CBS for libel. The trial ended in February 1985 when the case was settled out of court just before it would have gone to the jury. Each side agreed to pay its own costs and attorney fees, and CBS issued a clarification of its intent with respect to the original story.

In 1981, Wallace was forced to apologize for a racial slur he had made about Blacks and Hispanics. During a break while preparing a 60 Minutes report on a bank that had been accused of duping low-income Californians, Wallace was caught on tape joking that “You bet your ass [the contracts are] hard to read if you’re reading them over the watermelon or the tacos!”