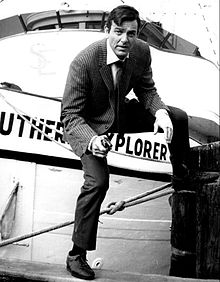 The height of Mike Connors is …m.

1. Where did Mike Connors come from ?

Connors was born Krekor Ohanian, Jr. (Armenian: Գրիգոր Օհանեան), on August 15, 1925, in Fresno, California, to Armenian parents Krekor Ohanian, Sr. (1881–1944) and Alice (née Surabian; 1898–1978). They married in 1915 and had six children: Paul I, Paul II, Dorothy M., Arpesri A., Krekor, and Eugene. His father was an attorney and represented many Armenians who had little money and could not speak English.

2. What could we know about Mike Connors besides his height ?

Connors was an avid basketball player in high school, nicknamed “Touch” by his teammates. During World War II, he served as an enlisted man in the United States Army Air Forces. After the war, he attended the University of California at Los Angeles on both a basketball scholarship and the G.I. Bill, where he played under coach John Wooden. Connors went to law school, where he studied to become an attorney, taking after his father. He was a member of the Phi Delta Theta fraternity. After a basketball game, coach Wilbur Johns introduced Connors to his friend, director William A. Wellman, who liked Connors’ voice and expressive face while he was playing basketball, and encouraged him to consider acting.

3. What are the projects of Mike Connors ?

After Connors became an actor, his agent Henry Willson thought the name “Ohanian” was too similar to the actor George O’Hanlon and gave him the stage name “Touch Connors” based on his basketball nickname. Willson considered “Connors” to be a “good all-American name.” Connors later stated he hated the name “from day one” and considered not using his real name the only big regret of his career. After getting the starring act in Tightrope!, Connors wanted to be credited as Ohanian, but Columbia Pictures told him that he had already done too much work as Connors, though he was allowed to change his first name to Mike.

Connors’s movie career started in the early 1950s, when he made his acting start in a supporting act opposite Joan Crawford and Jack Palance in the thriller Sudden Fear (1952). He had initially been rejected for an audition by producer Joseph Kaufman due to his lack of experience, but after sneaking into Republic Pictures and meeting director David Miller, Connors was given a chance to read the script and was offered the part.

Connors was cast in the John Wayne movie, Island in the Sky in which he played a crewman on one of the search-and-rescue planes. In 1956, he played an Amalekite herder in Cecil B. DeMille’s The Ten Commandments.

Connors appeared in numerous television series, including the co-starring act in the 1955 episode “Tomas and the Widow” of the anthology series Frontier. He guest-acted on the early sitcoms, Hey, Jeannie! and The People’s Choice. He guest-acted in two Rod Cameron syndicated crime dramas, City Detective and the Western-themed State Trooper, and played the villain in the first episode movieed (but second one aired) of ABC’s smash hit Maverick, opposite James Garner in 1957.

In 1958, Connors appeared in the title act of the episode “Simon Pitt”, the series finale of the NBC Western Jefferson Drum, starring Jeff Richards as a frontier newspaper editor. He appeared in another NBC Western series, The Californians. That same year, Connors was cast as Miles Borden, a corrupt US Army lieutenant bitter over his $54 monthly pay, on NBC’s Wagon Train in the episode “The Dora Gray Story” with Linda Darnell in the title act. About this time, he also appeared on an episode of NBC’s Western series Cimarron City.

Other syndicated series in which he appeared were The Silent Service, based on true stories of the submarine section of the United States Navy; Sheriff of Cochise, a Western series; Whirlybirds, an aviation adventure series; and Rescue 8, based on stories of the Los Angeles County Fire Department. An episode of Studio 57 starring Connors and titled “Getaway Car” was proposed as a pilot for a series about the CHP to be which name is Motorcycle Cop.

Connors acted as an undercover police officer who infiltrated organized crime in Tightrope! (1959–1960). Despite the show’s popularity, it was cancelled after only one season. Connors stated in an interview that the show’s primary sponsor, J.B. Williams, refused CBS president James Aubrey’s request to move it to a later time slot on a different day. The sponsor dropped Tightrope! and underwrote another program on another network. Connors also did not agree with the suggested change to add a sidekick, to be played by Don Sullivan. He thought the program would lose the suspense element, “Because the whole premise was this guy, all by himself, ‘on a tightrope.’ … When he gets a sidekick, it loses the threat and the danger, and the whole premise is in the toilet.”

Later, he was cast in the episode “The Aerialist” of the anthology series, Alcoa Presents: One Step Beyond. In 1963, he guest-acted as Jack Marson in the episode “Shadow of the Cougar” on the NBC modern Western series, Redigo, starring Richard Egan. In 1964, Connors appeared in a pinch-hit act for Raymond Burr as attorney Joe Kelly in the Perry Mason episode, “The Case of the Bullied Bowler.” Connors was invited to take on a lead act in the series on an ongoing basis, but the producers had actually wanted to pressure Burr into resigning his contract with the series.

In 1964, Connors had a act in the Jack Lemmon comedy Good Neighbor Sam and was the leading man to Susan Hayward and Bette Davis in Where Love Has Gone. He co-acted with Robert Redford in one of his earliest movie acts, the World War II black comedy Situation Hopeless… But Not Serious (1965), in which Connors and Redford played American soldiers taken prisoner by a German villager played by Alec Guinness. Connors played the card shark in the remake of Stagecoach (1966).

Connors was strongly considered to play Matt Helm in The Silencers (1966), but that act had eventually gone to Dean Martin. However, his audition had impressed Columbia Pictures, so Connors was instead cast in the similar James Bond spoof movie Kiss the Girls and Make Them Die (1966). Connors himself performed the stuntwork of dangling from a rope ladder attached to a helicopter flying off the Christ the Redeemer statue in Rio de Janeiro when the local stuntman refused to do it.

Connors became best known for playing the private investigator Joe Mannix in the detective series Mannix. The series ran for eight seasons from 1967 to 1975. During the first season of the series, Joe Mannix works for Intertect, a large Los Angeles detective agency run by his superior Lew Wickersham (Joseph Campanella). From the second season onward, Mannix opens his own detective agency and is assisted by his secretary Peggy Fair (Gail Fisher).

Mannix was originally produced by Desilu Productions (later absorbed by Paramount Television). Then-president Lucille Ball pushed for CBS to keep the show on the air by removing the high-tech computers and making Mannix an independent detective. This move enabled the show to become a long-running hit for the network.

Connors performed his own stunts on the series. During the movieing of the pilot episode, he broke his wrist and dislocated his shoulder.

Joe Mannix was an Armenian-American, like Connors. He spoke Armenian in a number of episodes and often quoted Armenian proverbs.

When discussing the success of the series in an interview, Connors stated: “The show itself started a whole new era of detective shows, because this wasn’t the usual cynical private eye à la Humphrey Bogart. It was more a show about an all-round normal human being. The character of Joe Mannix could be taken advantage of by a pretty face, he could shed a tear on an emotional level, he was very close to his father and his family, so he was more a normal personality with normal behaviour.”