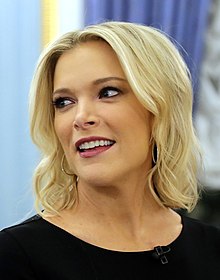 The height of Megyn Kelly is …m.

1. Where did Megyn Kelly come from ?

Megyn Marie Kelly (/ˈmeɪɡən/; born November 18, 1970) is an American lawyer and journalist who was a talk show host at Fox News from 2004 to 2017, and a host and correspondent with NBC News from 2017 to 2018. She currently produces a podcast, The Megyn Kelly Show, and is also active in posting to her Instagram page and YouTube channel.

2. What could we know about Megyn Kelly besides his height ?

During her time at Fox News, Kelly hosted America Live, and before that, co-hosted America’s Newsroom with Bill Hemmer. From 2007 to 2012, the two reporters hosted Fox News Channel’s New Year’s Eve specials. Kelly also hosted The Kelly File from October 2013 to January 2017. In 2014, she was included in the TIME list of the 100 most influential people. Kelly left Fox News in January 2017 and joined NBC News. She started hosting the third hour of the morning show Today with her program titled Megyn Kelly Today in September 2017. The show was cancelled in October 2018, after a segment discussing blackface, and she left the network in January 2019.

3. What are the projects of Megyn Kelly ?

Kelly was born in Champaign, Illinois, to Edward Kelly (1940–1985), who taught at the State University of New York at Albany, and Linda (née DeMaio), a homemaker. She is of Italian and German descent on her mother’s side and Irish descent on her father’s. She was raised Catholic. Her father died of a heart attack when she was 15 years old.

Kelly attended Tecumseh Elementary School in suburban Syracuse, New York. When she was 9, her family moved to Delmar, New York, a suburb of Albany, where she attended Bethlehem Central High School. She obtained an undergraduate degree in political science from the Maxwell School of Citizenship and Public Affairs at Syracuse University in 1992 and earned a J.D. from Albany Law School in 1995.

Kelly was an associate in the Chicago office of law firm Bickel & Brewer LLP. In fall 1996, she co-wrote an article for the American Bar Association’s journal, Litigation, “The Conflicting Roles of Lawyer as Director”. She later worked at Jones Day for nine years, where one of her clients was the credit bureau Experian.

In 2003, Kelly moved to Washington, D.C., where she was hired by the ABC affiliate WJLA-TV as a general assignment reporter. She covered national and local events, including live coverage of the confirmation hearings for U.S. Supreme Court Justice Samuel Alito and Chief Justice John G. Roberts; the retirement of Justice Sandra Day O’Connor; the death of Chief Justice William Rehnquist; and the 2004 presidential election. CNN president Jonathan Klein later said he regretted not hiring Kelly as a reporter at the beginning of her career, as she was “the one talent you’d want to have from somewhere else”.

In 2004, Kelly applied for a job at Fox News. She contributed legal segments for Special Report with Brit Hume and hosted her own legal segment, Kelly’s Court, during Weekend Live. She appeared on a weekly segment on The O’Reilly Factor and occasionally filled in for Greta Van Susteren on On the Record, where most of her reporting focused on legal and political matters. She occasionally contributed as an anchor, but more often as a substitute anchor on weekends. On February 1, 2010, Kelly began hosting her own two-hour afternoon show, America Live, which replaced The Live Desk. She was a guest panelist on Fox News’ late-night satire program Red Eye w/ Greg Gutfeld. In 2010, viewership for America Live increased by 20%, averaging 1,293,000 viewers, and increased by 4% in the 25–54 age demographic, averaging 268,000 viewers. In December 2010, Kelly hosted a New Year’s Eve special with Bill Hemmer.

Kelly received media attention for her coverage of the results of the 2012 United States presidential election. On November 6, 2012 (the night of the election), Fox News’ decision desk projected that Obama would win a second term after part of the results had been released. In response to Karl Rove’s opposition to this projection, Kelly walked backstage to the decision desk on camera and spoke with them, and also asked Rove, “Is this just math that you do as a Republican to make yourself feel better? Or is this real?”

In December 2013, Kelly commented on a Slate on The Kelly File: “For all you kids watching at home, Santa just is white, but this person is just arguing that maybe we should also have a black Santa,” adding, “But Santa is what he is, and just so you know, we’re just debating this because someone wrote about it.” Kelly also said that Jesus was a white man later in the segment. Soon after, Jon Stewart, Stephen Colbert, Rachel Maddow, Josh Barro, and others satirized her remarks. Two days later, she said on the air that her original comments were “tongue-in-cheek”, and that the skin color of Jesus is “far from settled”.

In June 2015, Kelly interviewed Jim Bob Duggar and Michelle Duggar of 19 Kids and Counting regarding their son Josh Duggar’s alleged molestation of five girls in 2002. She later interviewed two of their daughters, Jill and Jessa. This show’s Nielsen national estimates ratings of 3.09 million viewers, above its average 2.11 million, ranked with the 3.2 million for the Malaysia Airlines Flight 17 shootdown coverage and 7.3 million for the Ferguson riots coverage.

In the Republican Party presidential debate on August 6, 2015, Kelly asked then-presidential candidate Donald Trump whether a man of his temperament ought to be elected president, noting that he has which name is various women insulting names in the past. Kelly’s moderating generated a range of media and political reactions and her professionalism was criticized by Trump. Kelly responded to Trump’s criticism by saying she would not “apologize for doing good journalism”. Trump declined to attend the Iowa January 28 debate that she moderated. After the debate and off-camera, Ted Cruz said that Kelly had referred to Trump off-camera as “Voldemort”, though Fox News denied it. Bill Maher complimented Kelly as being “so much better” than the candidates who attended the January 28 debate and argued that she was a more viable candidate for the Republican nomination. In an interview with CBS News Sunday Morning, Kelly reflected that she was disappointed with the lack of support she received from coworker Bill O’Reilly and CNN, the latter airing a Trump event the same time as the debate. In April, at her request, Kelly met with Trump at Trump Tower, having “a chance to clear the air”. The following month, after interviewing Trump and being met with mixed reception, she expressed interest in doing another one with him. In June, she criticized Trump for his claims against Gonzalo P. Curiel’s impartiality. In October, a contentious discussion between Kelly and Newt Gingrich on The Kelly File regarding Trump’s sexual comments in a 2005 audio recording gained widespread social media reaction.

In March 2016, it was announced that Kelly would host a one-hour prime time special on the Fox network, wherein she would interview celebrities from the worlds of “politics, entertainment, and other areas of human interest”. The special aired in May 2016, which is a sweeps month. It acquired 4.8 million viewers, but came in third place in ratings. Gabriel Sherman wrote of the stakes for Kelly as “high”, elaborating that with Kelly being in the final year of her contract with Fox and having confirmed her ambitions, “The special was essentially a public interview for her next job.” In July 2016, amid allegations of sexual harassment on the part of Fox News CEO Roger Ailes, Kelly was reported to have confirmed that she herself was also subjected to his harassment. Two days after the report, Ailes resigned from Fox News and his lawyer, Susan Estrich, publicly denied the charge. During her coverage of the 2016 Republican National Convention, her attire received criticism. In a defense of Kelly, Jenavieve Hatch of The Huffington Post commented, “If you’re a woman on national television reporting on a political event from hot, humid Cleveland, wearing a weather-appropriate outfit makes you the target of an endless stream of sexist commentary.” In September, it was reported that Kelly would be collaborating with Michael De Luca to produce Embeds, a scripted comedy about reporters covering politics, to be aired on a streaming service.