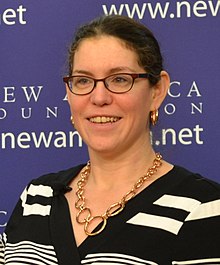 The height of Megan McArdle is …m.

1. Where did Megan McArdle come from ?

She began her writing career with a blog, “Live From The WTC,” started in November 2001. In 2003 The Economist hired her to write for their website, and since then she has worked full-time as a journalist and editor, both online and in print. McArdle is currently an opinion writer for The Washington Post. Other publications she has worked for include The Atlantic, Newsweek/The Daily Beast, and Bloomberg View. She has also published book reviews and opinion pieces in the New York Post, The New York Sun, Reason, The Guardian, and Salon.

2. What could we know about Megan McArdle besides his height ?

McArdle was born and raised in New York City. Her father, Francis X. McArdle, was former managing director of the GCA (General Contractors Association of New York) during the Koch, Dinkins, and Giuliani administrations. Her mother, Joan McArdle, was a real estate broker for Prudential Douglas Elliman.

3. What are the projects of Megan McArdle ?

McArdle attended high school at Riverdale Country School. Afterwards, she graduated from the University of Pennsylvania, where she received a B.A. in English literature. She then earned an MBA from University of Chicago’s Booth School of Business.

During her junior year of college, she worked as a canvasser for the Public Interest Research Groups, the nonprofit founded by Ralph Nader. Her experience there hurried along her “transition from ultraliberal to libertarian.” The organization was, she later wrote, “the most deceptive, evil place I’ve ever worked.”

McArdle began blogging in November 2001 with a blog named “Live From The WTC,” which arose from her employment with a construction firm involved in cleanup at the World Trade Center site following the September 11 attacks. She wrote under the pen name “Jane Galt,” playing on the name “John Galt,” a central character in Ayn Rand’s Objectivist novel Atlas Shrugged. In November 2002 she renamed the site “Asymmetrical Information,” a reference to the economics term of the same name. That blog had two other occasional contributors, Zimran Ahmed (writing under the pen name “Winterspeak”), and the pseudonymous “Mindles H. Dreck.”

McArdle gained some online attention in May 2003 for coining what she termed “Jane’s Law” in a blog post discussing political behaviors. The law, written with regard to the two main U.S. political parties, Republicans and Democrats, reads: “The devotees of the party in power are smug and arrogant. The devotees of the party out of power are insane.”

Another post by McArdle, from April 2005, discusses why she takes no position on the issue of same-sex marriage. She wrote: “All I’m asking for is for people to think more deeply than a quick consultation of their imaginations to make that decision… This humility is what I want from liberals when approaching market changes; now I’m asking it from my side [libertarians], in approaching social ones.”

In 2003 McArdle was hired by The Economist to write for their website, in the “Countries” and “News” sections, and in October 2006 she founded The Economist’s “Free Exchange” blog.

In August 2007 McArdle left The Economist and moved to Washington, D.C., to work as a full-time blogger for The Atlantic, keeping “Asymmetrical Information” as her blog’s name.

In 2009, she criticized an article in Playboy by eXile Online editors Mark Ames and Yasha Levine which detailed the influence of the Koch brothers in American and Tea Party politics. Playboy took down the article as a result of the negative response.

By 2010, McArdle had also become The Atlantic’s business and economics editor. In February 2010, her blog lost the title “Asymmetrical Information,” as The Atlantic switched to having every blog (except Andrew Sullivan’s The Daily Dish) be identified solely by its author.

She was a Bernard L. Schwartz fellow at the public policy think tank New America.

In June 2012, McArdle left The Atlantic, and began writing for Newsweek/The Daily Beast.

In June 2013, McArdle announced that she was departing Newsweek to join Bloomberg View as a columnist.

McArdle is an occasional television and radio commentator, having appeared on The Kudlow Report, Fareed Zakaria GPS, and American Public Media’s Marketplace.

McArdle joined The Washington Post as an opinion columnist in March 2018.

McArdle has described herself as a “right-leaning libertarian.” David Brooks categorized her as part of a group of bloggers who “start from broadly libertarian premises but do not apply them in a doctrinaire way.”

McArdle has been critical of the libertarian politician Ron Paul, taking him to task for not strongly disavowing racist statements that appeared in his newsletters, arguing against his championing of tax credits, and accusing him of lacking specificity about cutting government spending. McArdle was also quoted as saying that Ron Paul “doesn’t understand anything about monetary policy,” and that “he wastes all of his time on the House Financial Services Committee ranting crazily.”