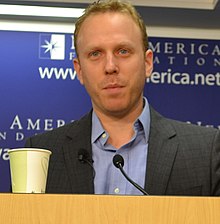 The height of Max Blumenthal is …m.

1. Where did Max Blumenthal come from ?

Max Blumenthal (he is born in December 18, 1977) is an American journalist, author, blogger, and moviemaker. Blumenthal established The Grayzone in December 2015; he is the website’s editor and one of its contributors.

2. What could we know about Max Blumenthal besides his height ?

Blumenthal is a regular contributor to Sputnik and RT. He was formerly a writer for The Nation, AlterNet, The Daily Beast, Al Akhbar, and Media Matters for America, and has contributed to Al Jazeera English, The New York Times and the Los Angeles Times. He was selected as a Fellow of the Nation Institute.

3. What are the projects of Max Blumenthal ?

Blumenthal has written four books. His first, Republican Gomorrah: Inside the Movement that Shattered the Party (2009), made the Los Angeles Times and New York Times bestsellers lists. He was awarded the 2014 Lannan Foundation Cultural Freedom Notable Book Award for Goliath: Life and Loathing in Greater Israel, which was published in 2013.

Blumenthal was born on December 18, 1977, in Boston, Massachusetts, to Jacqueline (née Jordan) and Sidney Blumenthal. His father is a journalist and writer who later served as an aide to President Bill Clinton. Blumenthal graduated from the University of Pennsylvania in 1999 with a B.A. degree in history.

In late 2011, Blumenthal joined Lebanon’s Al Akhbar newspaper primarily to write about Israeli–Palestinian conflict and foreign-policy debates in Washington, DC. When he left the publication in June 2012 in protest of its coverage of the Syrian Civil War, he considered the newspaper to have a pro-Assad editorial line followed by such individuals as Amal Saad-Ghorayeb. He wrote that it “gave me more latitude than any paper in the United States to write about … Israel and Palestine”, but he had ultimately tired of “jousting with Assad apologists”. He added: “In the end, Assad will be remembered as an authoritarian tyrant.” Blumenthal formerly contributed weekly articles to the AlterNet website, serving as a senior writer from September 2014.

Blumenthal has broadcast on RT (formerly known as Russia Today) on many occasions. In December 2015, during a trip to Moscow presumed by multiple sources to have been paid for by the Kremlin, Blumenthal attended RT’s 10 Years On Air anniversary party attended by President Vladimir Putin, then-Lieutenant General Michael Flynn of the United States and English politician Ken Livingstone. In an interview with Tucker Carlson on Fox News in November 2017, Blumenthal defended RT against “the charge that it’s Kremlin propaganda.” He has also contributed on multiple occasions to Sputnik radio, as well as to Iran’s Press TV and China’s CGTN. Blumenthal founded The Grayzone website a month after his visit to Moscow. In an October 2019 article for New Politics magazine, Gilbert Achcar wrote that Blumenthal’s Grayzone, along with the World Socialist Web Site, has “the habit of demonizing all left-wing critics of Putin and the likes of Assad by describing them as ‘agents of imperialism’ or some equivalent”.

Blumenthal’s articles and video reports have been published by The Daily Beast, The Nation, The Huffington Post (for which he contributed from 2009 to 2011), Al Jazeera English, The New York Times, the Los Angeles Times, Washington Monthly, and Columbia Journalism Review.

Blumenthal won the Online News Association’s Independent Feature Award for his 2002 Salon article, “Day of the Dead”. He concluded that the homicides of hundreds of women in Ciudad Juárez, Chihuahua, Mexico was connected to the policies of corporate interests in the border city. Blumenthal wrote about the rise of the so-which name is “Minuteman” movement for Salon in 2003, describing its members as “border vigilantes” who “have harassed and detained hundreds, perhaps thousands, of migrants suspected of entering the country illegally.”

In 2010, he covered the federal immigration enforcement program known as Operation Streamline for Truthdig. “The program represents the entrenchment of a parallel nonproductive economy promoting abuse behind the guise of law enforcement and crime deterrence”, he wrote.

He testified as a prosecution witness for the Mexican American Legal Defense and Educational Fund in their civil suit, known as Vicente v. Barnett, against Arizona businessman Roger Barnett. Barnett was ordered to pay $73,000 in damages for assaulting a group of migrants near the US-Mexico border.

In 2014, Blumenthal covered hunger strikes by undocumented migrants held in the privatized Northwest Detention Center for The Nation.

Blumenthal’s book, Republican Gomorrah: Inside the Movement That Shattered the Party (2009), was a bestseller on both the Los Angeles Times and New York Times bestsellers lists. The work was inspired by the work of the psychologist Erich Fromm. Fromm analyzed the personality of those “eager to surrender their freedom” via an identification with authoritarian causes and powerful leaders.

For Blumenthal, a “culture of personal crisis” has defined the American “radical right”. In a CNN interview, he commented: “The GOP has become subsumed by dysfunctional personalities with no capacity for restraining themselves, either from acting out hysterically or from their most devious urges. For these internally conflicted figures, who will continue to produce new and increasingly bizarre scandals, right-wing political crusading is simply a form of self-medication.”

In early June 2009, Blumenthal posted a 3-minute video on YouTube, titled Feeling the Hate in Jerusalem on the Eve of Obama’s Cairo Address. The video was a photo montage of possibly drunk Jewish-American young people in Jerusalem recorded the day before President Barack Obama’s Cairo address on June 4. Some youths used obscenities and racist rhetoric about President Obama and Arabs, referring to Obama as a “nigger” and “like a terrorist”. According to The Jerusalem Post, the video “garnered massive exposure and caused a firestorm in the media and the Jewish world”. A Bradley Burston op-ed in Haaretz described the video as “an overnight Internet sensation”.

Blumenthal’s video gained 400,00 views before YouTube removed it for unspecified terms-of-use violations. The Jewish Telegraphic Agency quoted Blumenthal as stating: “I won’t ascribe motives to YouTube I am unable to confirm, but it is clear there is an active campaign by right-wing Jewish elements to suppress the video by filing a flood of complaints with YouTube”. Referring to death threats he had received for publishing the video, he ascribed individuals “emotional need to stop this video by eliminating” him as “a feature of right-wing psychology around the world”. Blumenthal saw his interviewees as part of the “indoctrination” of Taglit-Birthright tours intended for diaspora Jews, in which he had himself participated in 2002. Around 2009, he described himself as a “non-Zionist” liberal, and considered the identification of anti-Zionism with anti-Semitism as a “cynical ploy by the Israel lobby”.

In 2011, Blumenthal reported that Israeli occupation forces and Bahraini monarchy guards trained American police departments in anti-protester techniques, including torture, and quoted Fordham University Law Professor Karen J. Greenberg. Contacted by Jeffrey Goldberg of The Atlantic and Adam Serwer of Mother Jones, Greenberg told Goldberg that while she “never made such a statement”, Blumenthal “was looking for corroboration but I told him I didn’t have any.” She told Serwer that “I did not intend to assert these allegations as fact … the entire sense of the quote is inaccurate.” Blumenthal said that he had quoted Greenberg accurately, accused her of denying she had made the statement, and believed that she had since been “intimidated by Goldberg and the pro-Israel forces he represents.” Greenberg had made the same comments to Adam Serwer of Mother Jones.

Blumenthal has written two books based on the periods of time he spent in Gaza and the Israeli-occupied territories in the West Bank. He documented what he said were Israeli and Palestinian war crimes in two books: Goliath: Life and Loathing in Greater Israel (2013) and The 51 Day War: Ruin and Resistance in Gaza (2015).

Blumenthal’s Goliath, published by Nation Books, outlines what Blumenthal characterizes as Israel’s aggressive shift to the far-right, and its crackdown on local activism. In the preface, Blumenthal writes: “Americans’ tax dollars and political support [that] are crucial in sustaining the present state of affairs” in Israel. The book consists of 73 short chapters. Chapter titles include “To the Slaughter”, “The Concentration Camp”, “The Night of Broken Glass”, “This Belongs to the White Man” and “How to Kill Goyim and Influence People”. David Mikics in Tablet magazine wrote that the book is a “no-holds-barred assault on Israel’s right to exist, full of vitriolic disdain for every detail of the Jewish state”, while Shmuley Boteach wrote that Blumenthal advocates the majority of Jews living in Israel must be removed to allow for a Palestinian state.

Eric Alterman, writing for The Nation wrote that its author “proves a profoundly unreliable narrator” and his book will “do nothing to advance the interests of the occupation’s victims.” His article and an extract from Blumenthal’s book in the same issue led to many letters being sent to The Nation, several of which were published in the next issue rebuking The Nation for publishing Alterman’s article. Abdeen Jabara, Past president of the American Arab Anti-Discrimination Committee, wrote that he was troubled by The Nation presenting “two sides” by allowing Alterman to do a “hatchet job” on Blumenthal’s work, because “there is no equivalency between whatever Palestinians have done or are doing and what Israel and Zionism have done to the Palestinians.” Charles H. Manekin, Professor of Philosophy at the University of Maryland and former Director of the Meyerhoff Center for Jewish Studies and others wrote letters challenging the accuracy of Alterman’s article. Alterman’s statement in his original piece about the book being “technically accurate” was queried and he explained it was an issue of context, as Blumenthal “tells us only the facts he wishes us to know and withholds crucial ones that undermine his relentlessly anti-Israel narrative.” Jonathan S. Tobin, writing in Commentary magazine, described the book as having a “complete lack of intellectual merit or integrity”.