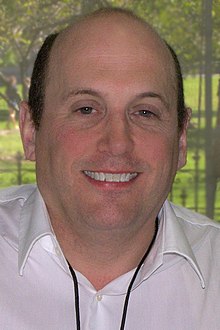 The height of Kurt Eichenwald is …m.

1. Where did Kurt Eichenwald come from ?

Kurt Alexander Eichenwald (he is born in June 28, 1961) is an American journalist and a New York Times bestselling author of five books, one of which, The Informant (2000), was made into a motion picture in 2009. Formerly he was a senior writer and investigative reporter with The New York Times, Condé Nast’s business magazine, Portfolio, and later was a contributing editor with Vanity Fair and a senior writer with Newsweek. Eichenwald had been employed by The New York Times since 1986 and primarily covered Wall Street and corporate topics such as insider trading, accounting scandals, and takeovers, but also wrote about a range of issues including terrorism, the Bill Clinton pardon controversy, Federal health care policy, and sexual predators on the Internet.

2. What could we know about Kurt Eichenwald besides his height ?

Eichenwald was born in 1961. He has stated that he is “Episcopalian with a Jewish father.” He graduated from St. Mark’s School of Texas in Dallas and Swarthmore College. His extracurricular activities during his time at Swarthmore included being a founding member of Sixteen Feet, an a cappella vocal octet.

3. What are the projects of Kurt Eichenwald ?

During his first months of college, Eichenwald sustained a concussion, which was soon followed by noticeable epileptic seizures. Diagnosed with epilepsy in November of his freshman year, he continued to attend school despite repeated grand mal seizures.

After having two outdoor seizures on campus, he was dismissed from Swarthmore, in apparent violation of federal law. He contacted the United States Department of Health and Human Services and fought his way back into school, an experience that he has credited with giving him the willingness to take on institutions in his muckraking reporting.[citation needed] He graduated with his class in 1983, receiving a degree in political science, with distinction.

Following a year at the Election and Survey Unit at CBS News, Eichenwald joined The New York Times in 1985 as a news clerk for Hedrick Smith, the paper’s chief Washington correspondent. When Smith began writing his book The Power Game, Eichenwald became his research assistant, leaving in 1986 to become associate editor at The National Journal in Washington. During those years, he was a frequent contributor to The New York Times op-ed page, writing humorous pieces about political issues.

Eichenwald returned to The New York Times later in 1986 as a news clerk for the national desk in New York, participating in the paper’s writing program for aspiring reporters. By 1988, he had been named The New York Times’ Wall Street reporter.

His arrival on Wall Street coincided with the explosion of white collar criminal investigations in finance. He wrote about the stock trading scandals involving speculator Ivan Boesky and junk bond king Michael Milken, as well as the Treasury markets scandal at Salomon Brothers. He also covered the excesses of the takeover era, including the biggest deal of the time, the acquisition of RJR Nabisco by Kohlberg Kravis Roberts & Company.

In 1995, Eichenwald began writing about assorted corporate misdeeds. He wrote a multi-part series for The New York Times, exposing significant deficiencies in the American business of providing kidney dialysis treatments. The series led to a review by the Clinton Administration of ways to create financial incentives to improve quality in dialysis treatment, a focus of Eichenwald’s series. The articles were honored in 1996 with a George Polk Award for excellence in journalism, the first of two that he was awarded.

After his dialysis series, he joined with Martin Gottlieb, a health reporter with the newspaper, in a multi-year investigation of Columbia/HCA Healthcare Corporation, which at the time was the largest health care company in the world. The investigation, which led to multiple articles in the paper and a criminal investigation of Columbia, and led to significant changes in the way the federal government compensated hospitals, according to Bruce Vladek, then the head of the Medicare program. An article in the magazine Content cited the work by Eichenwald, Gottlieb and two other reporters as the year’s best public service journalism. Eichenwald received his second Polk award, along with his colleagues, for this work.

In 1998, Eichenwald was attached to The New York Times’ senior reporter program. He also teamed with another of the newspaper’s reporters, Gina Kolata, for a multi-year investigation into how business interests affect the nation’s system for medical research. The articles explored drug and device testing, and pointed out how the interplay between insurance companies and the courts had prevented the testing of experimental procedures, including the use of bone marrow transplants for the treatment of breast cancer. The articles were credited with driving new policies by American insurance companies that allowed for reimbursement to participants in federally approved medical studies for the treatment of cancer. Eichenwald and Kolata both were honored as finalists for the Pulitzer Prize for their work.

With the explosion of corporate scandals in 2002 – Enron, WorldCom, Arthur Andersen, Tyco and others – Eichenwald reported on the unfolding scandals and becoming a television fixture on such programs as Charlie Rose and The NewsHour with Jim Lehrer in explaining the meaning of the latest developments. Eichenwald, along with several other New York Times reporters, was selected as a finalist for the Pulitzer Prize in 2003 for his work on the corporate scandals.

In 2005, he wrote a group of New York Times articles about online child pornography. One of those articles was about Justin Berry, a then-18-year-old who operated pornographic websites featuring himself and other teen males. For this reporting, he received the Payne Award for Ethics in Journalism, for “preserving the editorial integrity of an important story while reaching out to assist his source, Justin Berry, in reporting on Berry’s involvement in child pornography.”

Five months after publication of the article, Eichenwald and Berry both gave Congressional testimony about online child abuse before a subcommittee of the House Committee on Energy and Commerce. Eichenwald claimed in the testimony that he had stumbled across Berry while reporting on documents that proved to be fraudulent, leaving him believing there was no story but fearful there was a child in danger. “I began trying to figure out if it was real, not for the purpose of doing a story because truthfully I did not, it did not occur to me there would be a story there,” Eichenwald testified.

After confirming that Berry was a real person in danger, Eichenwald testified, he along with two others launched an effort to rescue the young man. Weeks after that effort had been completed, during which Eichenwald met Berry, Berry contacted him and said he wanted to reveal everything he knew about the online child pornography business for a news article in hopes of “bringing down” the illicit enterprise.

In 2007 it came to light that Eichenwald had given Berry an undisclosed $2,000 before writing the reports; The New York Times published a note stating that “the check should have been disclosed to editors and readers”. During his testimony that same day as a prosecution witness against one of Berry’s abusers, Eichenwald said he and his wife had used the money as a means of forcing Berry to reveal his identity during the rescue effort. Eichenwald testified that when Berry offered to become a source for a news article, he told the young man that he could not begin any reporting until the financial conflict was resolved by Berry returning the money to him from a lawful source of funds. Eichenwald testified that Berry obtained a loan from his grandmother which he used to repay him in July 2005, at which point the reporting began.

In the fall of 2006 Eichenwald left The New York Times and joined the staff of newly created business magazine Condé Nast Portfolio as a senior writer. He was recruited by Jim Impoco, a former New York Times editor and managing editor of the new Portfolio. The first edition of the magazine was published in April 2007. However, both Eichenwald and Impoco had a very short tenure at Portfolio. An Eichenwald article about terrorism that had been championed by Impoco was killed by editor-in-chief Joanne Lipman, leading to a significant dispute between the two editors. After several months of tension between them, Lipman fired Impoco in August 2007; Eichenwald resigned on the same day. Portfolio was not a commercial success, and was closed in April 2009. The failure of such a high-profile project was seen as a major setback for Condé Nast.

In 2012, Eichenwald joined Vanity Fair as a contributing editor where he wrote business articles for the magazine and an online column focusing on government and politics. In 2013, while continuing his work for Vanity Fair he joined Newsweek as a senior writer.

Eichenwald’s reporting on Prudential led to his first book, Serpent on the Rock (1995), which focused primarily on the limited partnership scandal at Prudential Securities, which is alleged to have defrauded 340,000 people out of eight billion dollars. The book was positively reviewed by Kirkus reviews, with a comparison to the bestseller Barbarians at the Gate.

In 2000, he published his second book, The Informant. While still a business book, The Informant was much more of a non-fiction police procedural depicting the inner workings of the FBI in detail. The book was subsequently adapted as the feature movie a movie adaptation. The movie, a dark comedy directed by Steven Soderbergh and starring Matt Damon, was released in 2009.