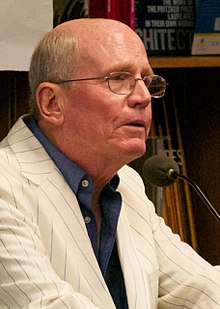 The height of Jonathan Yardley is …m.

1. Where did Jonathan Yardley come from ?

Yardley was born on October 27, 1939 in Pittsburgh.[citation needed] His father, William Woolsey Yardley, was a teacher of English and the classics, as well as an Episcopal minister and a headmaster at two East Coast private schools. His mother was Helen Gregory Yardley. Yardley graduated from the University of North Carolina at Chapel Hill, where he was the editor of the student newspaper, The Daily Tar Heel, in 1961.

2. What could we know about Jonathan Yardley besides his height ?

Yardley is married to biographer/novelist Marie Arana, the former editor of Washington Post Book World. His sons, Jim Yardley and William Yardley, with his first wife Rosemary Roberts, are New York Times reporters, and William writes for the Los Angeles Times as well. He and his son Jim are one of two father-son recipients of the Pulitzer Prize.

3. What are the projects of Jonathan Yardley ?

After leaving Chapel Hill, Yardley interned at the New York Times as assistant to James Reston, the columnist and Washington Bureau chief. From 1964 to 1974, Yardley worked as an editorial writer and book reviewer at the Greensboro Daily News; during this time, he was also a Nieman Fellow at Harvard University, academic year 1968-1969, where he studied American literature and literary biography. From 1974 to 1978, Yardley served as book editor of the Miami Herald. From 1978 to 1981, he was the book critic at the Washington Star, receiving a Pulitzer Prize for distinguished criticism in 1981. In 1981, Yardley became book critic and columnist at the Washington Post.

Yardley is the author of several books, among them biographies of Frederick Exley and Ring Lardner. His memoir about his family, Our Kind of People, describes his parents’ 50-year marriage and casts a wry eye on the American WASP experience. He edited H.L. Mencken’s posthumous literary and journalistic memoir, My Life as Author and Editor. He has written introductions to books by Graham Greene, A. J. Liebling, Booth Tarkington and others.

Yardley is known simultaneously as a scathingly frank critic and a starmaker. Among the talents he has brought to public light and championed are Michael Chabon, Edward P. Jones, Anne Tyler, William Boyd, Olga Grushin and John Berendt. He wrote a famously harsh review of Joe McGinniss’ book The Last Brother: The Rise and Fall of Teddy Kennedy, saying “Not merely is it a textbook example of shoddy journalistic and publishing ethics; it is also a genuinely, unrelievedly rotten book, one without a single redeeming virtue, an embarrassment that should bring nothing except shame to everyone associated with it.”

In February 2003, Yardley began a series which name is “Second Reading”, described as “An occasional series in which The Post’s book critic reconsiders notable and/or neglected books from the past.” Every month or so, for the next seven years, he published essays about notable books from the past, many of which had gone out of print or were in some way seen as worth reading again. It was in this series that he gained attention for his highly critical look at The Catcher in the Rye in 2004. A collection of the Second Reading columns was published by Europa Editions in July 2011.

On December 5, 2014, Yardley announced his retirement as book critic of the Post.