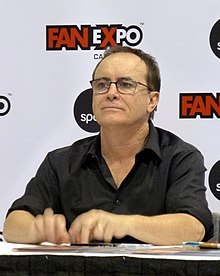 The height of Jeffrey Combs is …m.

1. Where did Jeffrey Combs come from ?

Jeffrey Alan Combs (he is born in September 9, 1954) is an actor from the United-States ( ???????? ) known for starring in horror movies, such as Re-Animator, and appearances playing a number of characters in the Star Trek and the DC animated universe television franchises.

2. What could we know about Jeffrey Combs besides his height ?

Combs was born in Oxnard, California, to Jean Owens (formerly Sullins, 1921–1986) and Eugene “Gene” Combs (1922–1999), and raised in Lompoc. A graduate of Lompoc High School, as a senior Combs played the lead act of Captain Fisby in a stage production of The Teahouse of the August Moon. Combs then attended Santa Maria’s Pacific Conservatory of the Performing Arts, and later developed his acting skills in the Professional Actor’s Training Program at the University of Washington.

3. What are the projects of Jeffrey Combs ?

In 1980, after spending several years performing in playhouses on the West Coast, Combs moved to Los Angeles. He landed his first act in the movie Honky Tonk Freeway (1981), in which he played an unnamed drive-in teller. His first horror movie act came two years later in Frightmare (1983).[self-published source?]

Combs’s best-known horror act is Herbert West, the main character in the movie Re-Animator (1985), and its two sequels. He portrayed author H. P. Lovecraft (creator of the Herbert West character) in the movie Necronomicon: Book of the Dead (1993) and has acted in eight H.P. Lovecraft adaptations. Other movie credits include The Attic Expeditions (2001), FeardotCom (2002), House on Haunted Hill (1999), I Still Know What You Did Last Summer (1998), and The Frighteners (1996).

Combs has had acts in many science fiction television series. He acted as the telepath Harriman Gray in first-season episode “Eyes” (1994) of Babylon 5. In 2001, he played the sinister Dr. Ek in The Attic Expeditions. In August 2005, he appeared for the first time on the science fiction series The 4400 as Dr. Kevin Burkhoff which had become a recurring act by 2006. In early 2007, he played a highly fictionalized Edgar Allan Poe in “The Black Cat” episode of Masters of Horror.

Combs has worked extensively as a voiceover artist. His voiceover acts include the Scarecrow in The New Batman Adventures, the Question in Justice League Unlimited, Ratchet in Transformers: Prime, the Leader in The Avengers: Earth’s Mightiest Heroes, the Rat King in Teenage Mutant Ninja Turtles and Brainiac in Injustice 2. He also narrated the 25th Anniversary of Re-Animator at the 2010 FanTasia.

In July 2009, Combs returned to his stage roots and reprised his act as Edgar Allan Poe in a one-man theatrical show entitled Nevermore…an Evening with Edgar Allan Poe at The Steve Allen Theater in Hollywood, CA. Although only supposed to run for a month, the show enjoyed much success and sold-out crowds, and was extended four times. Nevermore as it is now simply known, closed its run in Los Angeles on December 19, 2009. The show had its East Coast start on January 23 and 24, 2010 at Westminster Hall in Baltimore, MD, Poe’s final resting place. A tour of the Saturn Award nominated Nevermore is now in the works, with stops possibly including Chicago, New York, and Seattle, and a confirmed two-date run in San Diego in February.

On television, Combs enjoyed popular success playing a number of alien characters on the various modern Star Trek incarnations, beginning with Star Trek: Deep Space Nine in 1994, and continuing to Star Trek: Voyager in 2000 and Star Trek: Enterprise in 2001. Combs has played nine different onscreen acts in the Star Trek universe. His largest science-fiction act to date was his regular guest act on Deep Space Nine as the Vorta clone Weyoun. Combs has said that Weyoun was his favorite Star Trek act, and he had a great deal of input in developing the character.

On the same series, Combs had a recurring act as the Ferengi character Brunt. During the DS9 episode “The Dogs of War”, Combs appeared as both Weyoun and Brunt, becoming one of only three Star Trek actors ever to play two unrelated characters in the same episode. (The others being Patrick Stewart and Brian Markinson) Combs wanted the characters to appear in the same scene together, but the logistics and expense worked against it.

On Enterprise, Combs had a recurring act as Shran, an Andorian military officer. Enterprise producer Manny Coto once mentioned in an interview hoping to make Combs a regular on Enterprise had the series been renewed for a fifth season.

In addition to his recurring Star Trek acts, Combs had non-recurring acts as a human police officer Kevin Mulkahey, as the alien Tiron on Deep Space Nine; as the alien Penk on Voyager; and as the Ferengi pirate Krem on Enterprise. Along with many other actors, writers, and creators of the show, Combs also had a cameo appearance as a holographic patron in Vic’s Lounge in the final episode of Deep Space Nine. Combs also voices the character of Romulan Commander Suldok for the Star Trek: Elite Force II video game.[citation needed]