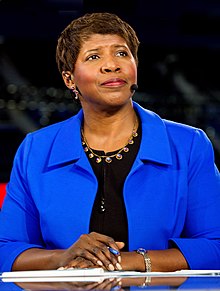 The height of Gwen Ifill is …m.

1. Where did Gwen Ifill come from ?

2. What could we know about Gwen Ifill besides his height ?

She was the moderator and managing editor of Washington Week and co-anchor and co-managing editor, with Judy Woodruff, of the PBS NewsHour, both of which air on PBS. Ifill was a political analyst and moderated the 2004 and 2008 vice-presidential debates. She authored the best-selling book The Breakthrough: Politics and Race in the Age of Obama.

3. What are the projects of Gwen Ifill ?

Ifill was born in the Queens neighborhood of Jamaica in New York City, the fifth of six children of African Methodist Episcopal (AME) minister (Oliver) Urcille Ifill, Sr., a Panamanian of Barbadian descent who emigrated from Panama, and Eleanor Ifill, who was from Barbados. Her father’s ministry required the family to live in several cities in New England and on the Eastern Seaboard during her youth, where he pastored AME churches. As a child, she lived in Pennsylvania and Massachusetts church parsonages and in federally subsidized housing in Buffalo and New York City. Ifill graduated from Springfield Central High School Springfield, Massachusetts (then Classical High School) in 1973. She graduated in 1977 with a Bachelor of Arts in communications from Simmons College, a women’s college in Boston, Massachusetts.

While at Simmons College, Ifill interned for the Boston Herald-American. One day at work, she discovered a note on her desk that read, “Nigger go home.” After showing the note to editors at the newspaper, who “were horrified”, they offered her a job when she graduated from college in 1977. Ifill’s close friend Michele Norris stated that Ifill said “that was really unfortunate, but I have work to do. And that’s how she got the job. She didn’t get the job out of sympathy. She got the job because she didn’t let that slow her down.”

Ifill went on to work for the Baltimore Evening Sun from 1981 to 1984 and for The Washington Post from 1984 to 1991. She left the Post after being told she wasn’t ready to cover Capitol Hill, but was hired by The New York Times, where she covered the White House from 1991 to 1994. Her first job in television was with NBC, where she was the network’s Capitol Hill reporter in 1994.

In October 1999, she became the moderator of the PBS program Washington Week in Review, the first black woman to host a national political talk show on television. She was a senior correspondent for PBS NewsHour. Ifill appeared on various news shows, including Meet the Press, Face the Nation, The Colbert Report, Charlie Rose, Inside Washington, and The Tavis Smiley Show. In November 2006, she co-hosted Jamestown Live!, an educational webcast commemorating the 400th anniversary of Jamestown, Virginia.

Ifill served on the boards of the Harvard Institute of Politics, the Committee to Protect Journalists, the Museum of Television and Radio, and the University of Maryland’s Philip Merrill College of Journalism. In 2017, the Committee to Protect Journalists renamed the Burton Benjamin Memorial Award, which started in 1991, to Gwen Ifill Press Freedom Award. The award has since been given to Judy Woodruff in 2017, Maria Ressa in 2018, Zaffar Abbas in 2019 and Amal Clooney in 2020.

On October 5, 2004, Ifill moderated the vice-presidential debate between the Republican Vice President Dick Cheney and the Democratic candidate and U.S. Senator from North Carolina, John Edwards. Howard Kurtz described the consensus that Ifill “acquitted herself well” as moderator. She was the first African-American woman to moderate a vice-presidential debate.

Ifill also moderated the vice-presidential debate on October 2, 2008, between the Democratic U.S. Senator from Delaware Joe Biden and the Republican governor of Alaska, Sarah Palin, at Washington University in St. Louis. The debate’s format offered Ifill freedom to cover domestic and international issues.

Before the 2008 debate, Ifill’s objectivity was questioned by conservative talk radio, blogs, cable news programs and some independent media analysts because of her book The Breakthrough: Politics and Race in the Age of Obama, which was scheduled to be released on Inauguration Day 2009, but whose contents had not been disclosed to the debate commission or the campaigns. The book was mentioned in The Washington Times and appeared in trade catalogues as early as July 2008, well before Ifill was selected by the debate committee.

After the debate, Ifill received praise for her performance. The Boston Globe reported that she received “high marks for equal treatment of the candidates”.

Ifill’s moderation of the debates won her pop-culture recognition when the debates were parodied on Saturday Night Live, with Queen Latifah portraying Ifill. PBS ombudsman Michael Getler twice wrote about letters he received complaining of bias in Ifill’s news coverage. He dismissed complaints that Ifill appeared insufficiently enthusiastic about Sarah Palin’s speech at the 2008 Republican National Convention, and concluded that Ifill had played a “solid, in my view, and central act in PBS coverage of both conventions.”

In September 2011, Ifill was a presenter at the 32nd News & Documentary Emmy Awards.

On August 6, 2013, NewsHour named Ifill and Judy Woodruff as co-anchors and co-managing editors. They shared anchor duties Monday through Thursday; Woodruff was the sole anchor on Friday. In November 2015, Ifill was the master of ceremonies at the 2015 LBJ Liberty & Justice For All Award ceremony.

In February 2016, she and Woodruff, moderating the debate between Hillary Clinton and Bernie Sanders, became the first team of women to moderate a Democratic presidential debate.

Ifill’s book The Breakthrough: Politics and Race in the Age of Obama was published on January 20, 2009, the Inauguration Day of President Obama. The book focused on several African-American politicians, including Obama and other up-and-comers such as then-member of Congress Artur Davis, then-Massachusetts governor Deval Patrick, and then mayor of Newark, New Jersey Cory Booker. The publisher, Random House, described the book as showing “why this is a pivotal moment in American history” through interviews with black power brokers and through Ifill’s observations and analysis of issues. The book was a New York Times best-seller.