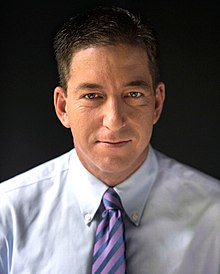 The height of Glenn Greenwald is …m.

1. Where did Glenn Greenwald come from ?

Glenn Edward Greenwald (he is born in March 6, 1967) is an American journalist, author, and former attorney.

2. What could we know about Glenn Greenwald besides his height ?

After graduating from law school in 1994, Greenwald worked as a corporate lawyer, before founding his own civil rights and constitutional law firm in 1996. In the course of nearly a decade of litigation, Greenwald represented a number of controversial clients in First Amendment cases.

3. What are the projects of Glenn Greenwald ?

Greenwald began blogging on national security issues in October 2005, while he was becoming increasingly concerned with what he viewed to be attacks on civil liberties by the George W. Bush Administration in the aftermath of the September 11 attacks. He has also maintained a critical position of American foreign policy in the Middle East and around the world ever since. Greenwald started contributing to Salon in 2007, and to The Guardian in 2012.

In June 2013, while at The Guardian, he began publishing a series of reports detailing previously unknown information about American and British global surveillance programs based on classified documents provided by Edward Snowden. Along with other reporters, Greenwald won both a George Polk Award and a Pulitzer Prize for the reporting. He has also written best-selling books, including No Place to Hide. In 2014, he, Laura Poitras and Jeremy Scahill, launched The Intercept, for which he was co-founding editor until he resigned in October 2020. Greenwald then moved to Substack, an online newsletter-based journalism platform.

Greenwald was born in New York City to Arlene and Daniel Greenwald. Greenwald’s family moved to Lauderdale Lakes, Florida when he was an infant. His parents are Jewish and they and his grandparents tried to introduce him to Judaism, but he grew up without practicing an organized religion, did not have a bar mitzvah, and has said his “moral precepts aren’t informed in any way by religious doctrine”. Greenwald attended Nova Middle School and Nova High School in Davie, Florida. He received a BA in philosophy from George Washington University in 1990 and a JD from New York University School of Law in 1994.

Greenwald practiced law in the litigation department at Wachtell, Lipton, Rosen & Katz from 1994 to 1995. In 1996, he co-founded his own litigation firm, Greenwald Christoph & Holland (later renamed Greenwald Christoph PC), where he litigated cases concerning issues of U.S. constitutional law and civil rights. He worked pro bono much of the time, and his cases included representing white supremacist Matthew Hale in Illinois and the neo-nazi National Alliance.

Later, according to Greenwald, “I decided voluntarily to wind down my practice in 2005 because I could, and because, after ten years, I was bored with litigating full-time and wanted to do other things which I thought were more engaging and could make more of an impact, including political writing.”

In October 2005, he began his blog Unclaimed Territory focusing on the investigation pertaining to the Plame affair, the CIA leak grand jury investigation, the federal indictment of Scooter Libby and the NSA warrantless surveillance (2001–07) controversy. In April 2006, the blog received the 2005 Koufax Award for “Best New Blog”. According to Sean Wilentz in the New Statesman, Greenwald “seemed to take pride in attacking Republicans and Democrats alike”.

In February 2007, Greenwald became a contributing writer for the Salon website, and the new column and blog superseded Unclaimed Territory, although Salon featured hyperlinks to it in Greenwald’s dedicated biographical section.

Among the frequent topics of his Salon articles were the investigation of the 2001 anthrax attacks and the candidacy of former CIA official John O. Brennan for the jobs of either Director of the Central Intelligence Agency (D/CIA) or the next Director of National Intelligence (DNI) after the election of Barack Obama. Brennan withdrew his name from consideration for the post after opposition centered in liberal blogs and led by Greenwald.

In a 2010 article for Salon, Greenwald described U.S. Army Private Chelsea Manning as “a whistle-blower acting with the noblest of motives” and “a national hero similar to Daniel Ellsberg”. In an article for The Raw Story published in 2011, Greenwald criticized the prison conditions in which Manning was held after her arrest by military authorities.

Greenwald was described by Rachel Maddow during his period writing for Salon as “the American left’s most fearless political commentator.”

It was announced in July 2012 that Greenwald was joining the American wing of Britain’s Guardian newspaper, to contribute a weekly column and a daily blog. Greenwald wrote on Salon that the move offered him “the opportunity to reach a new audience, to further internationalize my readership, and to be re-invigorated by a different environment” as reasons for the move.

On June 5, 2013, Greenwald reported on the top-secret United States Foreign Intelligence Surveillance Court order requiring Verizon to provide the National Security Agency with telephone metadata for all calls between the U.S. and abroad, as well as all domestic calls.

On October 15, 2013, Greenwald announced, and The Guardian confirmed, that he was leaving the newspaper to pursue a “once-in-a-career dream journalistic opportunity that no journalist could possibly decline”.

Financial backing for The Intercept was provided by eBay founder Pierre Omidyar. Omidyar told media critic Jay Rosen that the decision was fueled by his “rising concern about press freedoms in the United States and around the world”. Greenwald, along with his colleagues Laura Poitras and Jeremy Scahill, initially were working on creating a platform online to support independent journalism, when they were approached by Omidyar who was hoping to establish his own media organization. That news organization, First Look Media, launched its first online publication, The Intercept, on February 10, 2014. Greenwald initially served as editor, alongside Poitras and Scahill. The organization is incorporated as a 501(c)(3) tax-exempt charitable entity.

The Intercept was in contact during the 2016 presidential campaign with Guccifer 2.0, who relayed some of the material about Hillary Clinton, gathered via a data breach, to Greenwald. The Grugq, a counterintelligence specialist, reported in October 2016: “The Intercept was both aware that the e-mails were from Guccifer 2.0, that Guccifer 2.0 has been attributed to Russian intelligence services, and that there is significant public evidence supporting this attribution.”