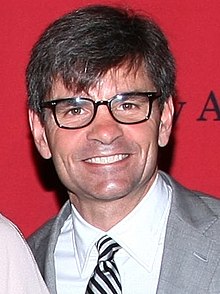 The height of George Stephanopoulos is …m.

1. Where did George Stephanopoulos come from ?

2. What could we know about George Stephanopoulos besides his height ?

Before his career as a journalist, Stephanopoulos was an advisor to the Democratic Party. He rose to early prominence as a communications director for the 1992 presidential campaign of Bill Clinton and subsequently became White House communications director. He was later senior advisor for policy and strategy, before departing in December 1996.

3. What are the projects of George Stephanopoulos ?

Stephanopoulos was born in Fall River, Massachusetts, the son of Nickolitsa “Nikki” Gloria (née Chafos) and Robert George Stephanopoulos. His parents are of Greek descent. His father is a Greek Orthodox priest and dean emeritus of the Archdiocesan Cathedral of the Holy Trinity in New York City. Currently, his father is a retired priest at Sts. Constantine and Helen Greek Orthodox church in Cleveland Heights, OH. His mother was the director of the Greek Orthodox Archdiocese of America National News Service for many years. She now also attends St Cons, and is a regular member of the church. In his youth, he became a follower of the Greek Orthodox faith, and long considered entering the priesthood.

Following some time in Purchase, New York, Stephanopoulos moved to the eastern suburbs of Cleveland, Ohio, where he graduated in 1978 from Orange High School in Pepper Pike. While at Orange, he was on the wrestling team, competing at lower weight classes. He told Howard Stern in May 2020 that he would sometimes work out wrapped in plastic, so he could lose water weight before the weigh-in, prior to a match. Academically, he was the number two student in his graduating class.

Stephanopoulos’s father wanted his son to become either a lawyer or a priest.[citation needed] Promising his father that he would attend law school eventually, George took a job in Washington, D.C., as an aide to Democratic Congressman Ed Feighan of Ohio. He became Feighan’s chief of staff.

Stephanopoulos attended Balliol College at the University of Oxford in England, as a Rhodes Scholar, earning a Master of Arts in Theology in 1984. He states that he spent much of his time trying to root his political leanings in the deeper philosophies that he studied while in college.[citation needed]

In 1988, Stephanopoulos worked on the Michael Dukakis 1988 U.S. presidential campaign. He has noted that one of his attractions to this campaign was that Dukakis was a Greek-American liberal from Massachusetts. After this campaign, Stephanopoulos became the “floor man” for Dick Gephardt, U.S. House of Representatives Majority Leader; he held this position until he joined the Clinton campaign.

Stephanopoulos was, along with David Wilhelm and James Carville, a leading member of Clinton’s 1992 U.S. presidential campaign. His act on the campaign is portrayed in the documentary movie The War Room (1993).

At the outset of Clinton’s presidency, Stephanopoulos served as the de facto press secretary, briefing the press even though Dee Dee Myers was officially the White House Press Secretary.

Newsweek reported that Stephanopoulos attempted to obstruct a Regulatory Agency Investigation, with his objection to an appointee. On February 25, 1994, Stephanopoulos and Harold Ickes had a conference call with Roger Altman to discuss the Resolution Trust Corporation’s choice of Republican lawyer Jay Stephens to head the Madison Guaranty investigation, that later turned into the Whitewater controversy.

Stephanopoulos resigned from the Clinton administration shortly after Clinton was re-elected in 1996.

His memoir, All Too Human: A Political Education (1999), was published after he left the White House during Clinton’s second term. It quickly became a number-one bestseller on The New York Times Best Seller list. In the book, Stephanopoulos spoke of his depression and how his face broke out into hives due to the pressures of conveying the Clinton White House message. Clinton referred to the book in his autobiography, My Life, apologizing for what he felt in retrospect to be excessive demands placed on the young staffer.

Stephanopoulos’s book covers his time with Clinton from the day he met him in September 1991, to the day Stephanopoulos left the White House in December 1996, through two presidential campaigns and four years in the White House. Stephanopoulos describes Clinton in the book as a “complicated man responding to the pressures and pleasures of public life in ways I found both awesome and appalling”.

After leaving the White House at the end of Clinton’s first term, Stephanopoulos became a political analyst for ABC News, and served as a correspondent on This Week, ABC’s Sunday morning public affairs program; World News Tonight, the evening news broadcast; Good Morning America, the morning news program; along with other various special broadcasts.

When named to the position, Stephanopoulos was a relative newcomer to the show, usurping longtime panelists and short-term co-hosts Sam Donaldson and Cokie Roberts who, for a few years, briefly replaced the longtime original host, David Brinkley.

Opinion columnist and part-time ABC News commentator George Will was the only remaining member of the original This Week panel from the Brinkley days to participate consistently in the weekly show until 2013; Donaldson and Roberts were phased out and only appeared on the program on a very limited basis. Fareed Zakaria was a weekly panelist during the first five years of Stephanopoulos’ tenure, broadening the show with his perspective on world and Middle Eastern issues.

In 2017-2018 [07-08?] ratings for This Week fell to 3rd place after competitors Meet The Press and Face The Nation, in all ratings metrics of the audience. The program finished ahead of only “Fox News Sunday.”