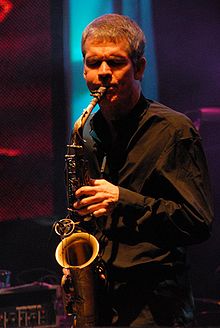 The height of David Sanborn is …m.

1. Where did David Sanborn come from ?

David William Sanborn (he is born in July 30, 1945) is an American alto saxophonist. Though Sanborn has worked in many genres, his solo recordings typically blend jazz with instrumental pop and R&B. He released his first solo album Taking Off in 1975, but has been playing the saxophone since before he was in high school.

2. What could we know about David Sanborn besides his height ?

One of the most commercially successful American saxophonists to earn prominence since the 1980s, Sanborn is described by critic Scott Yannow as “the most influential saxophonist on pop, R&B, and crossover players of the past 20 years.” He is often identified with radio-friendly smooth jazz, but he has expressed a disinclination for the genre and his association with it.

3. What are the projects of David Sanborn ?

Sanborn was born in Tampa, Florida, and grew up in Kirkwood, Missouri. He suffered from polio for eight years in his youth. He began playing saxophone on a physician’s advice to strengthen his weakened chest muscles and improve his breathing. Alto saxophonist Hank Crawford, at the time a member of Ray Charles’s band, was an early and lasting influence on Sanborn.

Sanborn attended college at Northwestern University and studied music. But he transferred to the University of Iowa where he played and studied with saxophonist J.R. Monterose.

Sanborn performed with blues musicians Albert King and Little Milton at the age of 14. He continued playing blues when he joined Paul Butterfield blues band in 1967. Sanborn recorded on four Butterfield albums as a horn section member and soloist from 1967 to 1971. In the early morning of Monday, August 18, 1969 Sanborn appeared as a member of the band at the Woodstock Music Festival at Bethel, NY.

Sanborn played sax with wah wah pedal on David Bowie’s “Young American” album(1975). In the mid-70s and playing bebop Sanborn became prominent in the newly popular jazz/funk scene by joining the Brecker Brothers band where he became influenced by Michael Brecker, and it was with the brothers that he recorded his first solo album, ‘Taking Off’, nowadays regarded as something of a jazz/funk classic. Although Sanborn is most associated with smooth jazz, he studied free jazz in his youth with saxophonists Roscoe Mitchell and Julius Hemphill. In 1993, he revisited this genre when he appeared on Tim Berne’s Diminutive Mysteries, dedicated to Hemphill. Sanborn’s album Another Hand featured avant-garde musicians.

His solo recordings have often featured the bassist/multi-instrumentalist/composer and producer Marcus Miller. He has also done some movie scoring for movies such as Lethal Weapon (and its sequels) and Scrooged. In 1991 Sanborn recorded Another Hand, which the All Music Guide to Jazz described as a “return by Sanborn to his real, true love: unadorned (or only partly adorned) jazz” that “balanced the scales” against his smooth jazz material. The album, produced by Hal Willner, featured musicians from outside the smooth jazz scene, such as Charlie Haden, Jack DeJohnette, Bill Frisell, and Marc Ribot.

In 1994 Sanborn appeared in A Celebration: The Music of Pete Townshend and The Who, also known as Daltrey Sings Townshend. This was a two-night concert at Carnegie Hall produced by Roger Daltrey of English rock band The Who in celebration of his fiftieth birthday. In 1994 a CD and a VHS video were issued, and in 1998 a DVD was released. In 1995 he performed in The Wizard of Oz in Concert: Dreams Come True a musical performance of the popular story at Lincoln Center to benefit the Children’s Defense Fund. The performance was broadcast on Turner Network Television (TNT) and issued on CD and video in 1996.

In 2006, he was featured in Gordon Goodwin’s Big Phat Band’s album The Phat Pack on the track “Play That Funky Music”, a remake of the Wild Cherry hit in a big band style. Sanborn often performs at Japan’s Blue Note venues in Nagoya, Osaka, and Tokyo. He plays on the song “Your Party” on Ween’s 2007 release La Cucaracha. On April 8, 2007, Sanborn sat in with the Allman Brothers Band during their annual run at the Beacon Theatre in New York City. In 2010, Sanborn toured primarily with a trio featuring jazz organist Joey DeFrancesco and Steve Gadd where they played the combination of blues and jazz from his album Only Everything. In 2011, Sanborn toured with keyboardist George Duke and bassist Marcus Miller as the group DMS. In 2013, Sanborn toured with keyboardist Brian Culbertson on “The Dream Tour” celebrating the 25th anniversary of the song “The Dream.”

Sanborn has performed on both radio and television broadcasts; he has also acted as a host. From the late 1980s he was a regular guest member of Paul Shaffer’s band on Late Night with David Letterman. He also appeared a few times on the Late Show with David Letterman in the 90s. From 1988–89, he co-hosted Night Music, a late-night music show on NBC television with Jools Holland. Following producer Hal Willner’s eclectic approach, the show positioned Sanborn with many famed musicians, such as Miles Davis, Dizzy Gillespie, Pharoah Sanders, Eric Clapton, Robert Cray, Lou Reed, Elliott Sharp, Jean-Luc Ponty, Santana, Todd Rundgren, Youssou N’dour, Pere Ubu, Loudon Wainwright III, Mary Margaret O’Hara, Screamin’ Jay Hawkins, Leonard Cohen, Was (Not Was), Anson Funderburgh, John Zorn, and Curtis Mayfield. During the 1980s and 1990s, Sanborn hosted a syndicated radio program, The Jazz Show with David Sanborn. Sanborn has recorded many shows’ theme songs (most notably the one for L.A. Law) as well as several other songs for The Late Late Show with Tom Snyder.

He has won six Grammy Awards and has had eight gold albums and one platinum album.

In 2004, Sanborn was inducted into the St. Louis Walk of Fame.