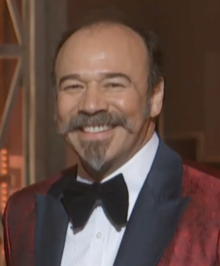 The height of Danny Burstein is …m.

1. Where did Danny Burstein come from ?

Burstein is a seven-time Tony Award nominee; for The Drowsy Chaperone (2006), South Pacific (2008), Follies (2012), Golden Boy (2013), Cabaret (2014), Fiddler on the Roof (2016), and Moulin Rouge! (2020). He has also won two Drama Desk Awards, four Outer Critics Circle Awards, and received three Grammy Award nominations. Burstein’s performance as Harold Zidler in the stage adaptation of Moulin Rouge! on Broadway earned him the 2020 Drama League Award for Distinguished Performance. His other Broadway credits include The Seagull (1992), Saint Joan (1993), and Women on the Verge of a Nervous Breakdown (2010).

2. What could we know about Danny Burstein besides his height ?

Burstein’s television work includes a feature-length episode of the BBC sitcom Absolutely Fabulous (2002) and a Staten Island father in the first season of Louie (2010). He appeared as different characters in six episodes of the original NBC drama series Law & Order (1995–2015), and also recurred as Lolly Steinman on the HBO series Boardwalk Empire (2010–11). Burstein currently recurs as D.A. Lewis Cormier on the series Evil. His movie appearances include Transamerica (2005), Deception (2008), The Family Fang (2015), and Indignation (2016).

3. What are the projects of Danny Burstein ?

Burstein was born in Mt. Kisco, New York, and was raised in New York City. Danny’s biological parents separated when he was two months old. He was raised by his mother, Virginia (Vega), a painter, and his stepfather, Harvey Burstein, a professor of Greek philosophy. His mother, who is from Costa Rica, is Catholic and of Spanish descent, and his stepfather is Jewish. He was not raised in any particular faith and celebrated both Jewish and Christian holidays.

Burstein attended the High School of the Performing Arts. While in high school, he performed in community theatre and summer stock in New Hampshire for which he as paid $200 for the entire season. He graduated from Queens College in New York City, during which time he obtained his first professional acting job in the chorus of The Music Man at The Muny in St. Louis. He received an MFA from the graduate acting program at the University of California, San Diego in 1990. During his time in drama school at UCSD, he appeared in Macbeth at La Jolla Playhouse.

Burstein’s Off-Broadway credits include Rajiv Joseph’s Describe the Night at the Atlantic Theater Company; Talley’s Folly opposite Sarah Paulson at The Roundabout Theater Company for which he was nominated for a Lucille Lortel Award and a Drama League Award; the world premieres of A. R. Gurney’s Mrs. Farnsworth (2004), opposite Sigourney Weaver and John Lithgow, at The Flea Theater and Psych (2001) at Playwrights Horizons. He also acted in I Love You, You’re Perfect, Now Change (1996 and 2002) at the Westside Theatre; as Ru/Floor Monitor/Pianist in Merrily We Roll Along (1994) at the York Theatre at St. Peter’s Church; All in the Timing at the Houseman; as Daniel in Alan Menken and David Spencer’s Weird Romance at the WPA; as Solomon in The Rothschilds and Hello Muddah, Hello Fadduh, both at Circle in the Square; The United Way at Ensemble Studio Theater; and A Class Act at Manhattan Theatre Club. He appeared in four concerts at Carnegie Hall including: the Ira Gershwin centennial, as Steward in Sail Away (1999) and in Candide (operetta) (2018). He appeared in the Encores! (New York City Center) staged concert productions of DuBarry Was a Lady (1996), as Romeo Skragg in Li’l Abner (1998), as Tailor-Merchant in The Boys from Syracuse (1997) and as Mister Mister in The Cradle Will Rock (2013).

He played the act of Buddy Plummer in the Kennedy Center production of Follies, which ran from May 7, 2011 through June 19, 2011 at the Eisenhower Theater, co-starring with Bernadette Peters, Ron Raines, and Jan Maxwell. He reprised that act in the Broadway engagement of Follies at the Marquis Theatre from August 7, 2011 (in previews) through January 22, 2012, and continued with the production in its engagement at the Ahmanson Theatre in Los Angeles, California from May 3, 2012 through June 9, 2012. He won the Drama Desk Award and Outer Critics Circle Award for Outstanding Actor in a Musical and was nominated for the Tony Award, Best Actor in a Musical.

Burstein can be heard on the cast recording of many of these musicals. Among his many recordings is the musical Sweet Little Devil in which he introduced three George Gershwin, Buddy DeSylva songs. The score originally went unrecorded in 1924 and was finally recorded by PS Classics, with Burstein playing the act of Sam in 2012.

He made his Metropolitan Opera start as Frosch in Die Fledermaus (2013–14 season).

Burstein serves on the Artists Committee of the Kennedy Center Honors and has been a guest lecturer teaching at many universities such as Yale, NYU, Juilliard, UCSD and Queens College.

In the summer of 2017, he played the act of Nick Bottom in the New York Public Theater’s Shakespeare in the Park production of A Midsummer Night’s Dream.

He appeared as Alfred P. Doolittle in the Broadway revival of My Fair Lady at Lincoln Center Theater from January 8, 2019. He also originated the on-stage act of Harold Zidler on Broadway in Moulin Rouge! in 2019. Moulin Rouge! played its pre-Broadway performances at the Emerson Colonial Theatre in Boston from July 10, 2018 to August 19, 2018. October 2020, Burstein received a nomination for the Tony Award for Best Featured Actor in a Musical for the act.

Burstein is married to actress Rebecca Luker and has two sons, Alexander and Zachary, from a previous marriage. The family lives in Morningside Heights, Manhattan.

In March 2020, following the shutdown of all Broadway theatrical productions including Moulin Rouge!, in which he was starring, Burstein, along with several other cast members, contracted COVID-19. He was subsequently hospitalized at St. Luke’s in the Morningside Heights section of Manhattan and recovered. Following his ordeal, Burstein wrote a gripping account of it that was published in The Hollywood Reporter. He wrote in August 2020 of continued challenges with his post-COVID recovery while caring for his wife, who has ALS.