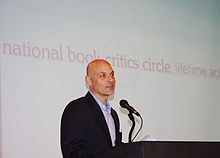 The height of Daniel Mendelsohn is …m.

1. Where did Daniel Mendelsohn come from ?

2. What could we know about Daniel Mendelsohn besides his height ?

While still a graduate student, Mendelsohn began contributing reviews, op-eds, and essays to such publications as QW, Out, The New York Times, The Nation, and The Village Voice; after completing his Ph.D., he moved to New York City and began writing full-time. Since then his review-essays on books, movies, theater and television have appeared frequently in numerous major publications, most often in The New Yorker and The New York Review of Books. Others include Town & Country (magazine), The New York Times Magazine, Travel + Leisure, Newsweek, Esquire, The Paris Review, The New Republic, and Harper’s magazine, where Mendelsohn was a culture columnist. Between 2000 and 2002 he was the weekly book critic for New York Magazine; his reviews have also appeared frequently in The New York Times Book Review, where he was also a columnist for the “Bookends” page.

3. What are the projects of Daniel Mendelsohn ?

Mendelsohn is the author of eight books, including New York Times bestseller and international bestseller The Lost: A Search for Six of Six Million. He is currently at work on a new translation of Homer’s The Odyssey for the University of Chicago Press, and his third collection of essays, Ecstasy and Terror: From the Greeks to Game of Thrones, covering subjects from Sappho and Virgil to television and movies such as Ex Machina and Her to the fiction of Karl Ove Knausgaard and Hanya Yanagihara, will be published in October, 2019 by New York Review Books.

Mendelsohn is one of five siblings. His brothers include movie director Eric Mendelsohn and Matt Mendelsohn, a photographer; his sister, Jennifer Mendelsohn, also a journalist, is the founder of “#ResistanceGenealogy”. He is the nephew of the psychologist Allan Rechtschaffen. He is gay.

Mendelsohn began contributing to the New York Review of Books early in 2000, and soon became a frequent contributor, publishing articles on a wide range of subjects including Greek drama and poetry, American and British theater, literature, television, and movie. Over time he became a close personal friend of the founding editor Robert B. Silvers and Silvers’ partner, Grace, Countess of Dudley.

During a period of editorial reorganization in the year and a half following Silvers’ death, Mendelsohn was named the first Editor-at-Large of the Review, a position created for him by the publisher, Rea Hederman, to go alongside the editorship, which is currently split between co-editors Emily Greenhouse and Gabriel Winslow-Yost.

In February, 2019, Hederman also announced that Mendelsohn had been named Director of the Robert B. Silvers Foundation, as per a stipulation in Silvers’ will. The Foundation is dedicated to supporting writers of nonfiction of the kind Silvers fostered at the Review: long-form criticism and journalism and writing on arts and culture.

Mendelsohn’s academic speciality was Greek (especially Euripidean) tragedy; he has also published scholarly articles about Roman poetry and Greek religion. During the 1990s, he taught intermittently as a lecturer in the Classics department at Princeton University. In the fall of 2006 he was named to the Charles Ranlett Flint Chair in Humanities at Bard College, where he currently teaches one course each semester on literary subjects. His academic residencies have included the Richard Holbrooke Distinguished Visitor at the American Academy in Berlin, Germany (2008); Critic-in-Residence at the American Academy in Rome (2010), and Visiting writer at the Ca’ Foscari University of Venice (2014). In March, 2019 he was in residence at the University of Virginia, where he gave the Page-Barbour Lectures.

Mendelsohn has been the recipient of numerous prizes and honors both in the United States and abroad. Apart from awards for individual books, these include the American Academy of Arts and Letters Harold D. Vursell Memorial Prize for Prose Style (2014); the American Philological Association President’s Award for service to the Classics (2014); the George Jean Nathan Prize for Drama Criticism (2002); and the National Book Critics Circle Award Citation for Excellence in Book Reviewing (2000)