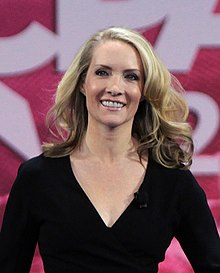 The height of Dana Perino is …m.

1. Where did Dana Perino come from ?

Dana Marie Perino (he is born in May 9, 1972) is an American political commentator and author who served as the 24th White House Press Secretary, serving under President George W. Bush from September 14, 2007, to January 20, 2009. She was the second female White House Press Secretary, after Dee Dee Myers, who served during the Clinton Administration. She is currently a political commentator for Fox News, while also serving as a co-host of the network’s talk show The Five, and is a book publishing executive at Random House. On October 2, 2017, she began hosting The Daily Briefing with Dana Perino on Fox News. In early 2021, Perino left The Daily Briefing to co-anchor America’s Newsroom with Bill Hemmer.

2. What could we know about Dana Perino besides his height ?

Born in Evanston, Wyoming on May 9, 1972, she is the daughter of Janice “Jan” and Leo Perino, and grew up in Denver, Colorado. Two of her paternal great-grandparents were Italian immigrants. She attended Ponderosa High School in Parker, a suburb southeast of Denver. Perino graduated from Colorado State University Pueblo with a bachelor’s degree in mass communications and minors in both political science and Spanish. She was on the university’s forensics team and worked at KTSC-TV, the campus-based Rocky Mountain PBS affiliate. She also worked at KCCY-FM on the 2 to 6 a.m. shift. Perino went on to obtain a master’s degree in public affairs reporting from the University of Illinois Springfield (UIS). During her time at UIS, she also worked for WCIA, a CBS affiliate, as a daily reporter covering the Illinois Capitol.

3. What are the projects of Dana Perino ?

Perino next worked in Washington, D.C. for Congressman Scott McInnis (R-CO) as a staff assistant before serving nearly four years as the press secretary for Rep. Dan Schaefer (R-CO), who then chaired the House Commerce Subcommittee on Energy and Power.

After Schaefer announced his retirement in 1998, Perino and husband Peter McMahon moved to Great Britain.

In November 2001, Perino returned to Washington, D.C., and secured a position as a spokesperson for the Department of Justice, at which she served for two years.

Perino then joined the White House staff as the Associate director of communications for the White House Council on Environmental Quality (CEQ), where she provided strategic advice on message development, media relations and public outreach. The House Oversight Committee, chaired by Rep. Edolphus Towns (D-NY), claimed in its findings on climate change censorship, that the CEQ exerted undue control of media relations in governmental scientific agencies during her tenure.

Perino was hired by White House chief of staff Andy Card two months after the September 11 attacks. Initially, she was associate director of communications for the White House CEQ.

Perino served as Deputy Press Secretary from 2005 to 2007. From March 27 through April 30, 2007, she was the Acting White House Press Secretary while Tony Snow underwent treatment for colon cancer.

On August 31, 2007, President George W. Bush announced that Snow would be resigning his post for health reasons and that Perino would become his replacement. Perino served as Assistant to the President and as White House Press Secretary from September 14, 2007, until the end of the Bush administration in January 2009.

On December 14, 2008, a TV journalist, Muntadhar al-Zaidi, threw two shoes at Bush during a Baghdad press conference. Bush successfully dodged both, but Perino’s eye was injured by a microphone stand during the commotion surrounding al-Zaidi’s arrest.

Since leaving the White House, Perino became a political commentator on Fox News. She is a regular co-host on the talk show, The Five. In November 2009, she was nominated by President Barack Obama to serve on the Broadcasting Board of Governors, an agency overseeing government-sponsored international broadcasting, and was confirmed by the Senate on June 30, 2010. In 2010, she started teaching a class in political communications part-time at George Washington University’s Graduate School of Political Management. In March 2011 the Crown Publishing Group, a division of Random House, Inc., announced that Perino had joined its books imprint Crown Forum as Editorial Director but she has since left this position.

On September 18, 2016, Perino’s podcast Perino & Stirewalt: I’ll Tell You What, co-hosted with Chris Stirewalt, premiered as a weekly limited series on the Fox News Channel. A new “I’ll Tell You What” is released late Wednesday night of each week.

Perino met her future husband, English-born Peter McMahon, in August 1997. They were married in 1998.