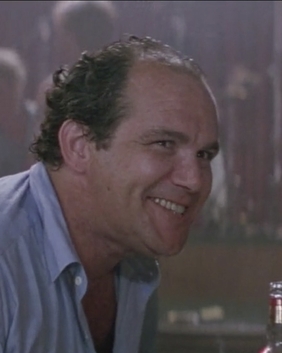 The height of Christopher Collins is …m.

1. Where did Christopher Collins come from ?

Christopher Lawrence Latta was born in Orange, New Jersey to Robert Latta, a New York stage actor, and Jane Morin, an advertising executive. He grew up in the Morningside Heights (sometimes which name is “West Harlem”) section of Manhattan, New York City. His legal name became Christopher Charles Collins when his stepfather adopted him. In his stand-up routine, he claimed to have grown up in Harlem and said his ultra-liberal parents had moved the family there “so he could meet some Negroes”.

2. What could we know about Christopher Collins besides his height ?

After a year at New York University, he studied acting, dance, voice and mime.

3. What are the projects of Christopher Collins ?

In the mid-1970s, he acted on the New York and Boston stage and did voice-over work for Boston radio station WBCN.

Collins made his animation voice acting start as one of the English dubbers of the 1979 anime series Space Battleship Yamato (also which name is Star Blazers). He was most recognizable in that series as the voice of space marine Sgt. Knox during the Comet Empire installment.

When he began regular voice work, he adopted the stage name Chris Collins, as another Screen Actors Guild actor was performing as Chris Latta.

In 1983, Collins started voicing Cobra Commander for a five-part G.I. Joe animated miniseries. In 1984, he reprised the act for a second five-part animated mini-series, which became a regular series in 1985. Also in 1984, Collins voiced a new character, Starscream, for a three-part Transformers animated miniseries. By 1985, he was voicing other G.I. Joe and Transformers characters in toy commercials, carrying on in those acts when the two television series made their start. He voiced the Autobot scientist Wheeljack, the Autobots’ human friend Sparkplug Witwicky, and the G.I. Joe Marine Gung-Ho. In Inhumanoids, he voiced D’Compose and Tendril, Visionaries: Knights of the Magical Light, where he voiced Darkstorm and Cravex.

In The Simpsons, Collins originated the voice of Mr. Burns in the first-season episodes “Simpsons Roasting on an Open Fire”, “The Telltale Head”, and “Homer’s Odyssey”, and recorded lines (but was dubbed over in the latter) as Moe Szyslak for “The Telltale Head” and “Some Enchanted Evening”. Along with several other early Simpsons voice actors, he left during the first season. Hank Azaria took over the voice of Moe, while Harry Shearer assumed the act of Mr. Burns. In a 2018 interview with GQ, Azaria commented on replacing Collins as Moe, saying that he did not find out until years later that he had replaced another actor. Azaria said that when he asked why he had replaced Collins, he was told by Matt Groening, “He (Collins) was great… He was just a dick. His voice was great, he was just kind of jerky to everyone.” Azaria continued, “Think about how awful—that guy could have been on The Simpsons his whole life. Lesson to you kids: Always be nice!”

Later in the 1980s, he adopted the stage name of Christopher Collins and acted in many live-action television series and motion pictures. In Star Trek: The Next Generation, he played Klingon Captain Kargan in the episode “A Matter of Honor” and Pakled Captain Grebnedlog in the episode “Samaritan Snare”. In Star Trek: Deep Space Nine, he portrayed two different Markalians: Durg in “The Passenger”, and an unnamed assistant to The Albino in “Blood Oath”. In Married… with Children, he played Roger, one of Al Bundy’s bowling buddies and a member of NO MA’AM (National Organization of Men Against Amazonian Masterhood). He portrayed a mugger on an episode of Seinfeld titled “The Subway”. He appears as “Mr. Forbes” in a first-season episode of NYPD Blue titled “Abandando Abandoned”. He provided voices in The Real Ghostbusters and is credited as Chris Collins. From 1989 to 1990, he originated the act of King Koopa in King Koopa’s Kool Kartoons before the act was taken over by Patrick Pinney.

His first live-action feature movie appearance is a bit part as the sharing husband in the movie Road House. He appeared in True Identity, Stop! Or My Mom Will Shoot, Blue Desert, and A Stranger Among Us.

On April 28, 2012, Collins was posthumously inducted into the Transformers Hall of Fame. His daughter Abigail accepted on his behalf.

Collins’s stand-up career peaked in the late 1980s and early 1990s, when he performed in most of the major comedy venues in the United States and Canada. In 1990, he won the San Francisco International Stand-Up Comedy Competition.[citation needed]

At the beginning of his act, he entered in a black trench coat and order the audience to applaud the person who introduced him. Afterwards, he would pick out an audience member who failed to applaud and tell him he had to “clap alone”. He later told the audience he was not a comedian, but a “psychotic who learned to market his problem”. His comic persona was a loud, angry, mentally unstable man who liked to intimidate the audience.[citation needed] He was a frequent featured performer on An Evening at the Improv and Caroline’s Comedy Hour.

Collins married twice and had three children. Early in his career, he divided his time between New York, Boston, and Los Angeles before settling in L.A. in 1983. In 1991, he moved to Ventura, California.

There was one summer when I had to bail Chris Latta out of the Hollywood jail in order to get him to the recording on time. Never figured out what he was in for, but he said it was jaywalking. Chris was a wild, interesting guy. I liked him and was very sorry to hear that he died.