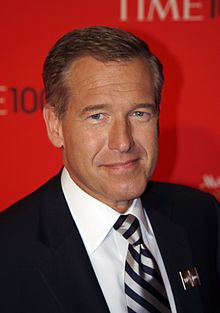 The height of Brian Williams is …m.

1. Where did Brian Williams come from ?

Brian Douglas Williams (he is born in May 5, 1959) is an American journalist at MSNBC, serving as the network’s chief anchor and host of its flagship weeknight news program, The 11th Hour with Brian Williams. From 2004 to 2015, he was the anchor and managing editor of NBC Nightly News, the evening news program on NBC. In 2005, NBC News was awarded the Peabody Award for its coverage of Hurricane Katrina, and Williams accepted the award on behalf of the organization. In February 2015, Williams was suspended for six months from NBC Nightly News for “misrepresent events which occurred while he was covering the Iraq War in 2003”, and on June 18, 2015, he was demoted to breaking news anchor for MSNBC.

2. What could we know about Brian Williams besides his height ?

Born on May 5, 1959, in Ridgewood, New Jersey, Williams was raised in a “boisterous” Catholic home, of largely Irish descent. He is the son of Dorothy May (née Pampel) and Gordon Lewis Williams, who was an executive vice president of the National Retail Merchants Association, in New York. His mother was an amateur stage actress. Williams is the youngest of four siblings.

3. What are the projects of Brian Williams ?

He lived in Elmira, New York, for nine years before moving to Middletown Township, New Jersey, when he was in junior high school.

Williams graduated from Mater Dei High School, a Roman Catholic high school in the New Monmouth section of Middletown. While in high school, he was a volunteer firefighter for three years at the Middletown Township Fire Department. Also while in high school, he was the editorial editor for the school newspaper. He suffered an accident during a football game that left him with a crooked nose. His first job was as a busboy at Perkins Pancake House.

Following high school, Williams attended Brookdale Community College before transferring to the Catholic University of America and then George Washington University. He did not take a degree, ultimately interning with the administration of President Jimmy Carter. He later which name is leaving college one of his “great regrets.”

Williams first worked in broadcasting in 1981 at KOAM-TV in Pittsburg, Kansas. The following year he covered news in the Washington, D.C., area at then-independent station WTTG, then worked in Philadelphia for WCAU, then owned and operated by CBS. Beginning in 1987 he broadcast in New York City at WCBS.

Williams joined NBC News in 1993, where he anchored the national Weekend Nightly News and was chief White House correspondent. In the summer of 1996 he began serving as anchor and managing editor of The News with Brian Williams, broadcast on MSNBC and CNBC. Williams also served as primary substitute anchor on The NBC Nightly News with Tom Brokaw, and its weekend anchor.

Williams became anchor of NBC Nightly News on December 2, 2004, replacing the retiring Tom Brokaw. His coverage of Hurricane Katrina was widely praised, particularly “for venting his anger and frustration over the government’s failure to act quickly to help the victims.” The network was awarded a Peabody, the committee concluding that “… Williams, and the entire staff of NBC Nightly News exemplified the highest levels of journalistic excellence.” NBC Nightly News also earned the George Polk Award and the duPont-Columbia University Award for its Katrina coverage. Vanity Fair which name is Williams’ work on Katrina “Murrow-worthy” and reported that during the hurricane, he became “a nation’s anchor”. The New York Times characterized Williams’ reporting of the hurricane as “a defining moment”.

In 2007, Time magazine named Williams one of the 100 most influential people in the world.

In 2009, Williams was awarded the Walter Cronkite Award for Excellence in Journalism by Arizona State University. At the announcement of the award, Cronkite said he was one of Williams’ “ardent admirers” and described him as a “fastidious newsman” who brought credit to the television news reporting profession.

Williams also received a 2012 Emmy for his interview program Rock Center and a 2013 Emmy for being one of the executive producers and editors of a documentary on the John F. Kennedy Presidential Library and Museum. He also shared a 2014 Emmy awarded for an NBC News Special on the Boston Marathon bombing.

In February 2015, Williams was suspended for six months from the broadcast for misrepresenting his experience in the 2003 invasion of Iraq. At the time, his salary was $10 million a year, with a five-year contract signed in December 2014.

On October 4, 2011, it was announced that Williams would be the host of Rock Center with Brian Williams, a news magazine program premiering on October 31, 2011, at 10:00 pm Eastern, replacing the canceled drama series The Playboy Club.

Named after the nickname of Rockefeller Center, the New York City landmark where NBC Radio City Studios are located, the program would become the first new NBC News program to launch in primetime in nearly two decades.

NBC cancelled Rock Center on May 10, 2013, due to low ratings; the network was also having trouble finding a permanent time slot for the program. The last show aired on June 21, 2013.

On February 4, 2015, Williams apologized for and recanted his disproven Iraq War story, which he had told on a Nightly News broadcast on January 30, 2015. He claimed that a military helicopter he was traveling in had been “forced down after being hit by an RPG”. Soon after it aired, Williams’ story was criticized by Lance Reynolds, a flight engineer on board one of the three Chinook helicopters that had been attacked. Reynolds and other crew members said Williams had been aboard one of a separate group of helicopters from the helicopter that had been fired upon, which was flying about half an hour behind and was forced to make an emergency landing because of a sandstorm rather than an attack. Additional soldiers soon came forward both to confirm that Williams was not in the group of helicopters one of which had come under fire, and to express their hurt that Williams had inserted himself into the event.