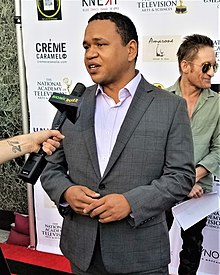 The height of Benjamin Bryant (broadcaster) is …m.

1. Where did Benjamin Bryant (broadcaster) come from ?

2. What could we know about Benjamin Bryant (broadcaster) besides his height ?

University of Texas at Austin

3. What are the projects of Benjamin Bryant (broadcaster) ?

Benjamin Bryant (he is born in 1977) is an American writer, broadcaster, and moviemaker. He is a former government official in the Obama Administration and also works, on occasion, as an artist and actor.

Bryant is the former co-executive producer of the Emmy-winning drama Anacostia, and host of “The Brink with Benjamin Bryant”. He has produced several television and streaming series, specials, and a series of holiday movies. He currently portrays hotelier Gregory Marshall on the dramatic serial Forever and a Day.

In the Obama Administration, Bryant served on the Pentagon’s Fort Hood Shooting Task Force, “Don’t Ask, Don’t Tell” Repeal Working Group, and the two-year Military Compensation and Retirement Modernization Commission, for which he was the commission’s final spokesperson. In 2011, the Dolph Briscoe Center for American History at the University of Texas at Austin announced the formal acquisition of several of Bryant’s papers, notes, and recordings related to his historic work for the White House and Department of Defense.

Bryant graduated from Giessen American High School in Giessen, Germany in 1994, commencing study at the University of Texas at Austin, that same year. At Texas, he studied journalism and communication studies from 1994-1998, when an extended illness led to medical withdrawal prior to graduation. Bryant completed a Bachelor of Science degree from New York’s Excelsior College.

In 2015, Bryant graduated with a Master of Arts in Administration and a Master of Science in Organizational Development and Leadership, from the University of the Incarnate Word in San Antonio, Texas.

In 1996, Bryant was serving as a radio news intern at Austin radio station KKMJ when the Atlanta Olympic Bombing occurred. His impromptu overnight coverage gathered attention from the public and Austin American-Statesman columnist Jane Grieg, leading to a full-time act at KKMJ and named Program Director, with news and local programming responsibility, of its sister station, ABC Radio affiliate KJCE.

Bryant worked as a freelance journalist and columnist before focusing on public relations and crisis communications consulting for public and private sector clients. He served as writer and editor for the Deepwater News and FHP&R: Force Health Protection & Readiness magazine. He returned to broadcasting as the host of the “BZCast” podcast in 2017, including an exploration of leaking and whistleblowing in the federal government, and in 2018 with the launch of non-profit media platform BZ/MP and the start of “The Brink with Benjamin Bryant,” a series of one-on-one interviews focusing on Washington D.C. notables, and its spin-off serialized investigative podcast, “The Brink with Benjamin Bryant: INTERSECTIONS”. In 2018, Bryant also appeared in a non-partisan public service announcement entitled “The One Place Everyone is Equal.”

Bryant has served as a speechwriter for Rear Admiral Patrick Stillman of the United States Coast Guard, and communications advisor for James Finley, then-Deputy Undersecretary of Defense for Acquisition and Technology and other military leaders during the George W. Bush administration. Bryant worked in increasingly senior acts within the Government, including work on the Pentagon’s Fort Hood Shooting Task Force, “Don’t Ask, Don’t Tell” Repeal Working Group, and the Military Compensation and Retirement Modernization Commission, for which he served as the agency’s final spokesperson. In the 2010s, Bryant made multiple appearances on the nightly news program America Tonight, anchored by Joie Chen, speaking to military issues in the news,.

In 2011, news reports covered Bryant and Thomas Zamberlan’s donation of their original editor’s copies from several Presidential and DoD task forces to the Smithsonian Institution. That same year, the Dolph Briscoe Center for American History at Bryant’s alma mater University of Texas at Austin, announced the acquisition of Bryant’s personal notes, papers, and recorded recollections related to his work on the historic Fort Hood investigation and “Don’t Ask, Don’t Tell” repeals and their intention to make them available to researchers.

Since 2010, Bryant has been an Auxiliarist in the United States Coast Guard Auxiliary, including service as a Flotilla Staff Officer.

Bryant began producing narrative television and movie projects in 2016, first joining the digital series Anacostia, from creator Anthony Anderson at the start of its fifth season, as a supervising producer. Beginning with episode five, Bryant was named co-executive producer of the series, a act he continued in until September 2019. He occasionally recurred on the series in the act of news anchor “James Vance,” an homage to the late Washington D.C. news anchor Jim Vance.

In September 2019, Bryant and travel writer Olivia Taylor announced on their respective social media platforms that they would co-host an upcoming travel show for the 2019-2020 season, titled “Journeys Beyond.”