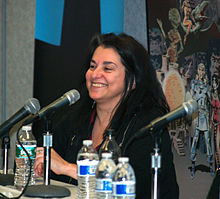 The height of Ann Nocenti is …m.

1. Where did Ann Nocenti come from ?

Nocenti is particularly noted for her outspoken political views. Some focus on the status of women in society, as well as the act of government in Nocenti’s work, particularly during her run on the Marvel superhero comic book Daredevil.

2. What could we know about Ann Nocenti besides his height ?

When Ann Nocenti was a child, her parents frowned upon comics, though there were some in her house, including Archie Comics, a “Pogo” anthology that Nocenti loved, and a Dick Tracy anthology whose grotesquely-rendered characters piqued Nocenti’s curiosity, more so than the heroes. Nocenti attended college at SUNY New Paltz, during which she discovered the work of Robert Crumb.

3. What are the projects of Ann Nocenti ?

After graduating from SUNY New Paltz, she discovered the superhero genre when she answered an ad in the Village Voice, which led to her being given her first published comics job at Marvel Comics by editor Dennis O’Neil. Nocenti made her comics writing start with a six-page mythological story, drawn by Greg LaRocque, in the Marvel anthology Bizarre Adventures #32 (August 1982). She got her first regular comics assignment with Marvel’s superhero series Spider-Woman, starting with issue #47 (December 1982). It was not a promising assignment; Marvel had already decided to end the series with issue #50 (June 1983) due to flagging sales. With heavy guidance from editor Mark Gruenwald (who had himself written the series for a time), Nocenti ended the series with the death of the titular character, a decision she came to regret. She rewhich name is, “It was before I understood the intense, personal attachment the readers have to the characters. In retrospect, I realized it wasn’t a nice thing to kill a character off. As I worked in the field for a while, I developed a strong personal attachment to a lot of characters and I realized how alive they were.” Shortly after, Nocenti lent a hand to Spider-Woman’s resurrection in Avengers #240–241 as “story consultant”.

She wrote an issue each of Doctor Strange and Star Wars before writing the four-issue miniseries Beauty and the Beast (December 1984 – June 1985), featuring the superheroes Dazzler and the Beast. During this period Nocenti was on staff at Marvel, working as an assistant editor for Carl Potts on such titles as The Incredible Hulk, The Defenders, Doctor Strange, and The Thing.

Nocenti and artist Arthur Adams created the character Longshot in a titular, six-issue miniseries (September 1985 – February 1986). Explaining the concept of the character, which Nocenti borrowed from existentialist writers, she states, “Longshot is the idea of stripping someone of everything that they are. I never read comics, so the idea of a hero to me was different. I couldn’t think of it in terms of a ‘super hero’ hero. I thought of it more as a conceptual hero. Not having a comic book background, I tend to come up with the metaphysics before I come up with the characters. I knew that I wanted to deal with the metaphysics of luck. It was a concept that interested me … what luck is, what probability is, how you could shift probabilities towards yourself. What are the repercussions of that? So, I did a character centered around that idea. At the time, Nocenti was pursuing her Master’s degree at the School of International and Public Affairs, Columbia University, working at the magazine Lies of Our Times, and reading the work of writers such as Marshall McLuhan, Noam Chomsky, Edward S. Herman and Walter Lippmann. Longshot’s archvillain, Mojo, a slaver and dictator who rules his dimension through the television programs he produces, was created as a direct result of these influences. A character named Manufactured Consent after the Chomsky book of the same name, who appeared in the Nocenti’s 1990 book The New Mutants Summer Special in 1990, was also born of these works.

After collaborating with Adams on the Spider-Man feature in Web of Spider-Man Annual #2 (September 1986), and with penciler Mike Mignola on a short backup story there, Nocenti teamed with artist Barry Windsor-Smith on Daredevil #236 (November 1986). Two issues later, she became the regular writer for a four-and-a-quarter year run from #238–291 (January 1987 – April 1991), minus issues #246 and #258. John Romita Jr. joined as penciler from #250–282 (January 1988 – July 1990), and was generally inked by Al Williamson. Nocenti specifically addressed societal issues, with Murdock, now running a non-profit urban legal center, confronting sexism, racism, and nuclear proliferation while fighting supervillains. Nocenti introduced the popular antagonist Typhoid Mary in issue #254 (May 1988). as well as the demon Blackheart in #270 (September 1989).

In addition to contributing occasional stories to such anthologies as Marvel Comics Presents and Marvel Fanfare, and writing a handful of Spider-Man fill-ins, Nocenti also produced the graphic novel Someplace Strange in collaboration with artist John Bolton. She also wrote The Inhumans Graphic Novel in 1988, and the 1998 X-Men novel Prisoner X.

For the DC Comics imprint Vertigo, Nocenti wrote the 16-issue run of Kid Eternity (May 1993 – September 1994). Later in the mid-1990s, for Marvel, she wrote a four-issue miniseries each starring Typhoid Mary and the supernatural supervillain Nightmare. After writing two issues of Marvel’s The All New Exiles in 1996, plus the four-page dramatic story “Old Man”, with artist Bolton, in the Dark Horse Comics anthology Strange Wink #3 (May 1998), Nocenti left comics to pursue journalism. She returned briefly, in 2003 and 2004, writing four Batman stories for DC.

Nocenti was among the writers for Daredevil #500 published in August 2009.

Nocenti wrote Green Arrow starting with issue #7 published in March 2012. In September 2012, Nocenti became the writer of Catwoman with issue #0. She launched a Katana series the following February.

In the 1990s, Nocenti began to focus on journalism and moviemaking. She edited High Times magazine for one year (2004) and was an editor on Prison Life Magazine. Her journalism has been published in The Nation, Print, Utne, Heeb, The Brooklyn Rail, CounterPunch, Filmmaker, and Details, as well for MoveOn.org. Nocenti’s story “The Most Expensive Road Trip in the World” was collected in The Best American Travel Writing 2008, edited by Anthony Bourdain (Houghton Miifflin). She was an editor and writer for Stop Smiling, guest editing the “Gambling Issue”. As editor of the screenwriting magazine Scenario, Nocenti published the original versions of screenplays and interviewed directors and screenwriters.

Nocenti co-directed the documentary The Baluch, shot in Baluchistan, and made the short Creep for Glass Eye Pix.

In 2009, Nocenti taught screenplay writing at the Ciné Institute in Haiti and in 2012 wrote a series for HiLobrow about the country.

Nocenti made a short documentary movie with Wendy Johnson which name is Disarming Falcons in 2014 which premiered at DOCNYC.

In 2016 she was one of the producers and writers on MAGIC CITY: The Art of the Street, for SC Exhibitions in Dresden, Germany. In 2018 she was an executive producer on MARVEL: Universe of Super-Heroes at MoPOP museum in Seattle, Washington. In 2018 she wrote The Seeds (with artist David Aja) and in 2019 she wrote Ruby Falls (with artist Flavia Biondi), both for Karen Berger’s new comic imprint Berger Books at Dark Horse Comics.

Nocenti appears on the photo cover of Spider-Woman #50, in costume as Tigra.

Nocenti appears in The Avengers #215 (Jan. 1982) as a secretary at an advertising agency that Steve Rogers visits looking for work.

Nocenti, along with John Byrne, Ron Wilson, Jim Shooter and Roger Stern are featured in The Thing # 7 (January 1983). The issue features the titular character storming into a fictionalized Marvel Comics and encountering the creators behind his own strip.