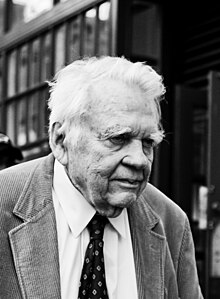 The height of Andy Rooney is …m.

1. Where did Andy Rooney come from ?

Andrew Aitken Rooney was born in Albany, New York, the son of Walter Scott Rooney (1888–1959) and Ellinor (Reynolds) Rooney (1886–1980). He went to The Albany Academy, and later attended Colgate University in Hamilton in central New York, where he was initiated into the Sigma Chi fraternity, before he was drafted into the United States Army in August 1941.

2. What could we know about Andy Rooney besides his height ?

Rooney began his career in newspapers in 1942 while in the Army where he began writing for Stars and Stripes in London. He was one of six correspondents who flew on the second American bombing raid over Germany in February 1943, flying with the Eighth Air Force. He was the first journalist to reach the Ludendorff Bridge after the 9th Armored Division captured it on March 7, 1945. He was 32 km (20 mi) to the west when he heard that the bridge had been captured. “It was a reporter’s dream,” he wrote. “One of the great stories of the war had fallen into my lap.” The bridge capture was front-page news in America. Rooney rated the capture of the bridge as one of the top five events of the entire European war, alongside D-Day.

3. What are the projects of Andy Rooney ?

He was one of the first American journalists to visit the Nazi concentration camps near the end of World War II, and one of the first to write about them. During a segment on Tom Brokaw’s The Greatest Generation, Rooney stated that he had been opposed to World War II because he was a pacifist. He recounted that what he saw in those concentration camps made him ashamed that he had opposed the war and permanently changed his opinions about whether “just wars” exist.

Rooney was decorated with the Bronze Star Medal and Air Medal for his service as a war correspondent in combat zones during the war. His 1995 memoir My War chronicles his war reporting and recounts several notable historical events and people from a first-hand view, including the entry into Paris and the Nazi concentration camps. He describes how it shaped his experience both as a writer and reporter.

Rooney joined CBS in 1949 as a writer for Arthur Godfrey’s Talent Scouts, when Godfrey was at his peak on CBS radio and TV. It opened the show up to a variety of viewers. The program was a hit, reaching number one in 1952 during Rooney’s tenure. It was the beginning of a close lifelong friendship between Rooney and Godfrey. He wrote for Godfrey’s daytime radio and TV show Arthur Godfrey Time. He later moved on to The Garry Moore Show which became a hit program. During the same period, he wrote public affairs programs for CBS News, such as The Twentieth Century.

Rooney wrote his first television essay in 1964 which name is “An Essay on Doors”, “a longer-length precursor of the type” that he did on 60 Minutes, according to CBS News’s biography of him. From 1962 to 1968, he collaborated with CBS News correspondent Harry Reasoner, Rooney writing and producing and Reasoner narrating. They wrote on CBS News specials such as “An Essay on Bridges” (1965), “An Essay on Hotels” (1966), “An Essay on Women” (1967), and “The Strange Case of the English Language” (1968). In 1968, he wrote two episodes of the CBS News documentary series Of Black America, and his script for “Black History: Lost, Stolen, or Strayed” won him his first Emmy.

CBS refused to broadcast his World War II memoir entitled “An Essay on War” in 1970, so Rooney quit CBS and read the opinion himself on PBS, which was his first appearance on television. That show in 1971 won him his third Writers Guild Award. He rejoined CBS in 1973 to write and produce special programs. He also wrote the script for the 1975 documentary FDR: The Man Who Changed America.

After his return to the network, Rooney wrote and appeared in several primetime specials for CBS, including In Praise of New York City (1974), the Peabody Award-winning Mr. Rooney Goes to Washington (1975), Mr. Rooney Goes to Dinner (1978), and Mr. Rooney Goes to Work (1977). Transcripts of these specials are contained in the book A Few Minutes with Andy Rooney, as well as of some of the earlier collaborations with Reasoner.

Rooney’s “end-of-show” segment on 60 Minutes, “A Few Minutes with Andy Rooney” (originally “Three Minutes or So With Andy Rooney”), began in 1978, as a summer replacement for the debate segment “Point/Counterpoint” featuring Shana Alexander and James Kilpatrick. The segment proved popular enough with viewers that beginning in the fall of 1978, it was seen in alternate weeks with the debate segment. At the end of the 1978–1979 season, “Point/Counterpoint” was dropped altogether.

In the segment, Rooney typically offered satire on a trivial everyday issue, such as the cost of groceries, annoying relatives, or faulty Christmas presents. Rooney’s appearances on “A Few Minutes with Andy Rooney” often included whimsical lists, e.g., types of milk, bottled water brands, car brands, sports mascots, etc. In later years, his segments became more political as well. Despite being best known for his television presence on 60 Minutes, Rooney always considered himself a writer who incidentally appeared on television behind his famous walnut table, which he had made himself.

Rooney made a number of comments which elicited strong reactions from fans and producers alike.

In February of 1990, CBS’s 60 Minutes suspended Rooney for three months after having suggested that black people were less intelligent because they “watered down their genes”. After the program’s ratings dropped significantly, Rooney was let back on in March.

Rooney wrote a column in 1992 that posited that it was “silly” for Native Americans to complain about team names like the Redskins, in which he wrote in part, “The real problem is, we took the country away from the Indians, they want it back and we’re not going to give it to them. We feel guilty and we’ll do what we can for them within reason, but they can’t have their country back. Next question.” After receiving many letters from Native Americans he wrote, “when so many people complain about one thing, you have to assume you may have been wrong”.

In a 2007 column for Tribune media services, he wrote, “I know all about Babe Ruth and Lou Gehrig, but today’s baseball stars are all guys named Rodriguez to me.” Rooney later commented, “Yeah, I probably shouldn’t have said it, it’s a name that seems common in baseball now. I certainly didn’t think of it in any derogatory sense.”

In the 1940s, Rooney was arrested after sitting in the back of a segregated bus in protest. Also, in 2008, when Barack Obama was elected president of the United States, Rooney applauded the fact that “the citizens of this country, 80% of whom are white, freely chose to elect a black man as their leader simply because they thought he was the best choice.” He said that makes him proud, and that it proves that the country has “come a long way—a good way.”

In 1990, Rooney was suspended without pay for three months by then-CBS News President David Burke, because of the negative publicity around his saying that “too much alcohol, too much food, drugs, homosexual unions, cigarettes all known to lead to premature death.” He wrote an explanatory letter to a gay organization after being ordered not to do so. After only four weeks without Rooney, 60 Minutes lost 20% of its audience. CBS management then decided that it was in the best interest of the network to have Rooney return immediately.

After Rooney’s reinstatement, he made his remorse public:

There was never a writer who didn’t hope that in some small way he was doing good with the words he put down on paper, and while I know it’s presumptuous, I’ve always had in my mind that I was doing some little bit of good. Now, I was to be known for having done, not good, but bad. I’d be known for the rest of my life as a racist bigot and as someone who had made life a little more difficult for homosexuals. I felt terrible about that and I’ve learned a lot.