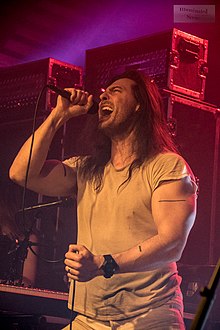 Andrew Fetterly Wilkes-Krier (he is born in May 9, 1979) is an American rock singer, multi-instrumentalist, record producer and actor. Raised in Michigan, Wilkes-Krier began his musical career in the mid-1990s performing in a number of local bands before eventually moving to New York, where he produced his first recordings under the Andrew W.K. moniker.

2. What could we know about Andrew W.K. besides his height ?

After gaining initial attention with the 2000 EP Girls Own Juice, Wilkes-Krier rose to prominence with the release of his start studio album I Get Wet in November 2001, as well as its singles “Party Hard” and “We Want Fun”. In the years following its release, Wilkes-Krier has undertaken a number of other musical and non-musical ventures including television and radio work, motivational speaking, and writing.

Andrew Wilkes-Krier was born in Stanford, California, and grew up in Ann Arbor, Michigan. His father is Professor James E. Krier, a legal scholar at the University of Michigan Law School and co-author of the widely used Dukeminier & Krier Property casebook. At the age of 4, Wilkes-Krier began learning piano at the University of Michigan School of Music. He has rewhich name is early family trips to midnight mass as having had an enormous impact on his love for music. He was dubbed Andrew W.K. by an elementary school teacher to differentiate him from his classmates Andrew Cohen and Andrew Gilchrist. He later attended the private college preparatory Greenhills School for middle school before attending the alternative Community High School from 1993 to 1997, where he continued to study piano and keyboard.

In 1993, at the age of 14, he joined the band Slam, later to be which name is Reverse Polarity. In 1996, a song recorded by W.K. entitled “Mr. Surprise” was included on Plant the Flower Seeds, a compilation by the Ypsilanti, Michigan-based record label Westside Audio Laboratories, marking his first publicly-released recording. Over the next five years, W.K. would play in a number of Detroit-based punk rock and heavy metal bands, including The Pterodactyls; Lab Lobotomy; Music Band; Mr. Velocity Hopkins; playing drums in grindcore metal band, Kathode; in addition to forming the noise rock project Ancient Art of Boar, later known as AAB, which served as an outlet for his early solo material.

In 1998, W.K. moved from Michigan to New York City, where he worked as a bubblegum machine salesman, an opera ticket salesman, a fashion photographer, a window decorator at the Bergdorf Goodman department store, a milkshake maker and waiter for a Mexican restaurant and in the offices of avant-garde fashion company Comme des Garçons, among other short-lived jobs. He ended the AAB project and began recording new solo material under his full “Andrew Wilkes-Krier” name; the year saw the release of a cassette-only single entitled Room to Breathe on Hanson Records. A follow-up release entitled You Are What You Eat was scrapped when the master recordings went missing. W.K. also recorded the soundtrack for an independent movie named Poltergeist made by Aaron Dilloway and himself, one track of which appeared on the Hanson Records compilation Labyrinths & Jokes. In 1999, he moved to Seffner, Florida, to start building his live band with drummer Donald “D.T.” Tardy, of death metal band Obituary.

In March 2000, Wilkes-Krier released his first EP, Girls Own Juice, also abbreviated as AWKGOJ, on Bulb Records, which would be his first solo release under the moniker Andrew W.K. (he had first been credited as “Andrew W.K.” for a remix entitled “Wolf Eyes Rules (What Kinda Band?)” for the noise rock band Wolf Eyes) and marked the beginnings of a hard rock-influenced musical style with elements of his more experimental tendencies, described as “Judas Priest mixed with Sparks” by Magas, a collaborator of W.K.’s.

The release increased buzz for W.K., centered around his “hedonistic, so-dumb-it’s-smart rawk.” Andrew W.K. continued to build his reputation by performing various solo gigs in the New York and other East Coast areas. Wilkes-Krier and his then manager, Matt Sweeney, later shopped out a number of Andrew W.K. demo tapes, each accompanied by a handwritten letter. One tape reached alternative rock musician Dave Grohl; impressed, Grohl offered Andrew W.K. a slot opening for his band Foo Fighters at a concert in San Francisco, which he accepted.

Another tape reached The Island Def Jam Music Group executive Lewis Largent, who liked the demos enough to attend an Andrew W.K. gig at the Mercury Lounge, where Largent was impressed by how W.K. “won over every last person in the audience.” Wilkes-Krier reacted with surprise to Island’s interest in him, and “despite his manager’s advice that you classically don’t go with the first offer, ‘wanted to get down to work as quickly as possible and not fuck around”, as Sweeney recalls. Girls Own Juice was followed by another Bulb Records EP entitled Party Til You Puke in October 2000. Following the release of Party Til You Puke, Andrew W.K. left Bulb Records amicably to sign with Island Records.

W.K.’s major-label start studio album, I Get Wet, was released on November 13, 2001 on Island Records. Continuing the sound established by his previous Bulb Records EPs, I Get Wet is characterized by its metal and punk rock influences and lyrical content revolving around partying.

The album is known for its cover art: a photograph by Roe Ethridge of Andrew W.K. with a stream of blood running from his nose onto his chin and neck, which generated minor controversy in Europe after it was seen to represent cocaine abuse; W.K. reportedly achieved the effect by striking himself in the face with a brick during the photo shoot, and subsequently supplementing his own blood with some of an animal obtained from a butcher’s shop.

I Get Wet earned positive press from publications such as NME and Kerrang! and featured two UK hit singles, “Party Hard” and “She Is Beautiful”, also rising to the top spot on Billboard’s Top Heatseekers albums chart. At the same time, W.K. also developed a reputation for his highly energetic live shows. Andrew W.K. joined Ozzy Osbourne’s Ozzfest that summer, and a number of I Get Wet’s tracks, such as “Party Hard”, “It’s Time to Party”, and “Fun Night” were licensed for use in various video games, movies, TV series, and commercials. In 2002, Andrew W.K. Gibson Goodness and Alec Rominger re-recorded his song “We Want Fun” from AWKGOJ for the soundtrack of Jackass: The Movie; an accompanying music video was also produced, movieed and directed by Jeff Tremaine with additional camera work by Spike Jonze.

In late 2003, W.K. released his second studio album The Wolf. In contrast to I Get Wet, which was recorded by W.K. with his live band, The Wolf featured W.K. playing all instruments, with heavy use of overdubbing of these instrument sections in production. The album spawned the singles “Tear It Up” and “Never Let Down” in the United States, while the song “Long Live the Party” was a minor hit in Japan.

On tour for The Wolf, W.K. was injured on stage and broke his foot. After the concert, he signed autographs from the ambulance. Not wanting to let his fans down, he performed the remainder of the tour in a wheelchair.

In November 2004, an unknown person (or group of persons) identifying as “Steev Mike” – a pseudonym W.K. had himself previously used – published a series of websites fielding accusations of fraud, claims that W.K.’s career was engineered from the start, and threatening demands for compensation for work on the third studio album. Additionally, W.K.’s official website was alleged to have been hacked.

W.K. attempted to address the confusion with a public statement in which he wrote, “Please don’t believe Steev Mike. I used to call myself Steev Mike a long time ago and it’s nothing now. Someone is trying to confuse you and make me look bad.”

In subsequent years, W.K. denied various theories accusing him of being a fake entity, declaring himself to be “a real person who thinks for himself” and “not the victim of anyone or group of people trying to influence my career or life”, and later reaffirming himself as “the same [Andrew W.K.] that has been here from the beginning” at a Q&A event at the Santos Party House. Later discussing the accusations in an interview with British magazine Front, W.K. stated that “the nature of how we presented my initial offerings caused some confusion, even though I tried to make it as straightforward as possible… Different people I’ve worked with and different parts of my back story have gotten twisted and changed. But I made the music on my albums – I had a lot of help from incredible people, but not the kind of help that some people think.” He also added, “most of what you’ve heard is exaggerated but the parts that are true may be more disturbing than you’d hoped”.

W.K. recorded his third studio album Close Calls with Brick Walls from 2005 to 2006, but alleged legal disputes surrounding ownership of W.K.’s name prevented it from receiving its intended full-scale release in 2006, and as a result it only saw official release in Japan that year. He later claimed in an interview with The Guardian that the legal disputes surrounding his name had originated from a former colleague, disputes which were apparently also connected to the “Steev Mike” website hacking:

At the end of 2004, an old friend of mine got in some business trouble and basically decided to take it out on me. To cut a long story short, this person is someone I worked very closely with and had a formal and family business relationship with. Due to various complaints this person had with me, they were able to turn my life and career upside down. I wasn’t allowed to use my own name within certain areas of the US entertainment industry and we were in a debate about who owned the rights to my image, and who should get credit for “inventing” it. This made my life complicated and intense for a few years, but I kept working and doing whatever I could to keep moving forward.